Ronaldinho entered in the 63rd minute, makes a cutting run pass Grava, the Santacroce, megs Cannavaro and scores top shelf on Navarro. He runs to the sideline commences the samba dance, and then simultaneously delivers a baby. MOTM, Player of the Decade, and Man of the Century! 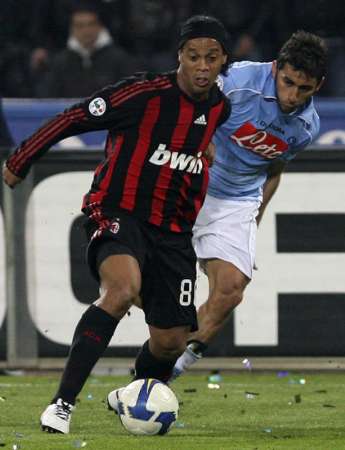 OK, so now that’s over with, let’s see what really happened…

Following the 63rd minute Napoli, specifically Zalayeta misses two easy chances, and Lavezzi and Hamsik finally decide to start playing as they are capable. Was it Ronaldinho’s fault? Of course it wasn’t, I mean, Flamini who ran himself into the ground, completed and won dozens of chances, and got into the attack, was clearly running on fumes. Becks who was still guilty of the errant pass or two, was cleary exhausted as well, and Pirlo who played a great match early on must have given up, because space was to be had quite nicely in the midfield, if you were wearing a blue shirt. It reminded me of the old saying, “One Brazilian is great, and two is grand, but three is suicide.” Carletto, in my opinion, did what he needed to do, what you all wanted him to do; he committed to the attack and getting the win. However, what I saw was a team that lost steel and spine in the center of the pitch and began to get opened up by a well organized Napoli that was waiting to strike.

Thankful to Zalayeta for missing what could have been two goals, and also to the Don who made the best coaching of the match for Milan by keeping him in on the pitch instead of working Dennis into the mix. But in all seriousness, a stout defensive performance really frustrated Milan in the place where they need dominate, on the edge of the attacking third. Pippo was his old self, does little, makes runs, and if he scores he scores, if not, he is a phantom. Pato who was blistering in his pace and even more dangerous on the left than normal was a bit to cheeky for my liking and at times tried to beat his man when he could have waited for numbers. Please don’t take this as a negative, he is a kid, and his experience will come, and these mistakes will wane, however when he got heated and space was at a premium he would have done well to find the open man and make a run. He still was the dangerous man on the pitch for Milan, and he is growing to become a real superstar. 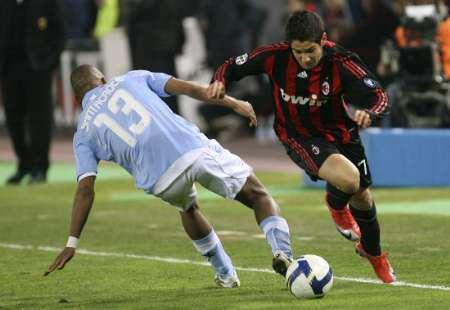 Back to Flamini, for a moment, who has gotten exponentially better with each passing match, saving tackles, make space for Pirlo, and being a passing option while others were not. In the same vain Pirlo was making his trademark lateral balls and on occasion tried the Napoli defense which was quite well marshaled by the younger Captain Canna. Many of you like Santacroce, rightfully so, but he was guilty of childish mistakes but was always saved by Canna, and even Contini who played extremely defending his man and space. Seedorf was poor yet again, and his passes were rusty, and his touch was harsh. Many times he was forced to play negatively because he could not even manage a simple turn or lateral ball. Without Kaka as his running mate close to him, he looked a bit lost, and was not able to do anything to hold and maintain possession as he was constantly harassed. He did manage a dangerous shot on goal, but the rest was forgettable to say the least.

On the brightside, Zambro, Janks, Favalli and Maldini were strong. Yes Zambro was guilty of a poor error to Mannini, and Janks was caught out of position more than I like to see, but the first half was a fairly stout defensive performance and solid possession that lead to nothing. Even Senderos managed to get into the mix in a positive fashion by closing passing lanes and getting his head on a ball or two to stifle the Napoli attacks. The real defensive star though was Paolo Maldini, who defied all logic and kept pace with Lavezzi, who just a few weeks ago was cruising past Juventus defenders in the Coppa Italia. As I watched Napoli lose on PK’s I remember thinking to myself that kid can move, but not fast enough, with Paolo running him down and closing him up. I don’t know how he does it, hell sometimes I don’t even know why he does it, but he just plain does, with a calmness and composure that we may very well NEVER see again. Thanks again Paolo, thanks again…

Considering the venue and the injury circumstances this is was an OK result. Kaka was definitely not match fit, and it didn’t help that the Don’s boys were up in his face nonstop. But the lack of creative options to make a difference or break a game is eerily apparent yet again for Carletto’s boys and until the squad gets healthy we may continue to see matches with a frustrating lack of cutting edge around the net when crowded in and around the box. Quite frankly, Donadoni and squad, read Carletto like a book, like many before him, and made things very difficult for Milan for the better part of the match. 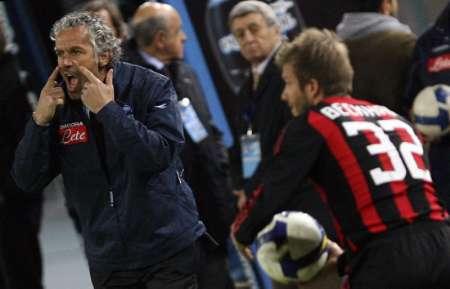 Lastly, Nelson Dida, you did it, a clean sheet! Many thanks to Zalayeta for making it easy, but spilling his little run when it was tapped to you was a little nerve wrecking. Thankfully that was the extent of the challenges, but hopefully the big zilcho on the scoresheet helps you remember you won two CL titles, and were in fact World Class.