Share All sharing options for: Just Not Good Enough...

Where do I even start, this performance was as bas the weather in Genoa. I struggled mightily to try and find some tiny little bright spot in today’s performances, but frankly I can’t. Sure Abbiati’s save on the FK early on was very nice, but after that the proverbial shit hit the fan. Defensively only Zambrotta could really call himself solid, Antonini got the start, but that is about all he did. Carletto didn’t even have the common courtesy to let the kid work through; instead he subbed him off at the half, so much for confidence booster. Soon thereafter, with a two goal deficit Carletto through on Favalli, and threw up the white flag as the saga continues. 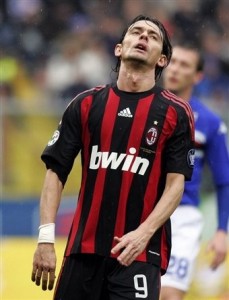 It is painfully evident that Pato needs help up front, and for as hard as he works and how quickly he plays, he just lacks the size and strength to be the lonely man up top. This is not a knock on Pato by any means, but he is a support striker who would thrive with a constant partner, and the Borriello injury is showing itself in every aspect of the game. Seedorf continues to suck hard and it is frustrating that he is allowed to remain on the pitch while a youngster like Antonini doesn’t get a shake to make a mistake.

The lack of a creative offensive attack sans Kaka is alarming and one would think a new attacking mind is a must come next season, any shape or form will do, but it can’t come soon enough. Back to back god awful performances with little to no offensive creativity are all the evidence that I need, and hopefully Fester feels the same way. But when Carletto looks down the bench and all he sees are aging defenders and Offside-Emerson, then the blame has to start spreading all over the board here. It made me chuckle a few days ago when Shehan mockingly blamed Dinho for the UEFA loss, despite Dinho being in Brazil with Adriano packing on the pounds. 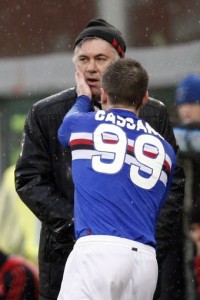 But Shehan wasn’t that far off, because had Dinho not been bought, maybe this season would have taken a much different turn, argue the early games as losses, but I would trade in those few for wins in this poor run in a heartbeat. This team has picked the wrong time of the season to hit a funk, and if the goal is to remain top three it may time to throw caution to the wind and start benching the regulars for a hope to find a spark. 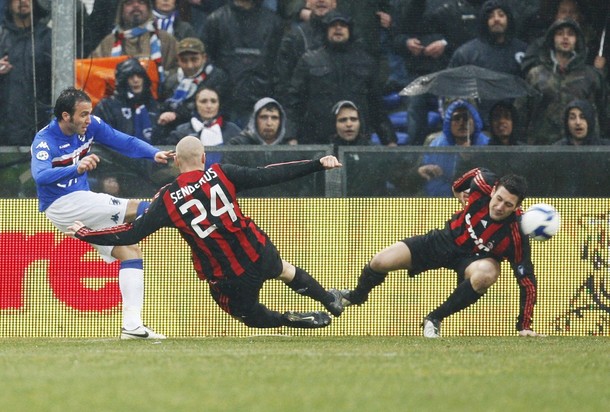 On the flipside, as I watched Samp today I was a bit intrigued. Sure they are a bit rough around the edges but the play with pace, a good shape, and classic attacking duo that reminds me a bit of Vialli and Mancini. There was a time when the Rossoneri gave you that hope of a future, of creativity, and a more successful. Instead as of late all I feel is a dead end doom and gloom of a team with no future and no real direction. The one thing we do have going for us in this awful week is the fact that both the Viola and Genoa both drew and kept Milan afloat in third for one more week.