EPL vs Serie A, the Battle Wages On...

Share All sharing options for: EPL vs Serie A, the Battle Wages On...

Just days after all three Serie A teams crash out of the CL I have already begun to see and read the beginnings of the EPL is better than Serie A banter. Sure as it stands the EPL is on top at the moment, ManU and Chelsea competed in the last final and all four EPL teams have advanced into the next round. It was funny but just a few weeks ago I listened to Tommy Smyth and Giorgio Chinaglia argue back and forth the possibility of all Serie A or all EPL teams being eliminated and now here we stand.

I am fan of the beautiful game and will watch EPL, La Liga, Bundesliga , Serie A and even MLS, hell I will watch whatever match I can get. For me each league brings a different style and substance that makes it more or less enjoyable. Growing up on Serie A, I have to say I am partial to it, but I do enjoy a good EPL match, but the styles are so different, which helps explain this current predicament for Serie A. As I said earlier, I do believe the EPL is superior at the moment, better teams, better players, and better tactics, but remember football is cyclical in nature and while EPL is having its day in the sun, it is only a matter of time before Serie A or even La Liga reclaims the throne. I still believe Bayern will win the CL this year, and then will we give the crown to the Bundesliga?

I would like to revisit an analogy that I once brought up in the comments , which was to liken the EPL to NASCAR and the Serie A to Formula 1. For those of you not familiar NASCAR is American stock car racing pitting fairly similar cars in a marathon of oval laps, while Formula 1 is open wheel racing featuring varying engines, subtley different cars, and non-oval based tracks. Each form of racing, like football, offers their very own positives and negatives, and fans of each will exhaustingly argue the superiority of their preferred type. But when you imaginatively put the two styles against each other you start to really see the analogy come to life.

If you put a big bulky NASCAR 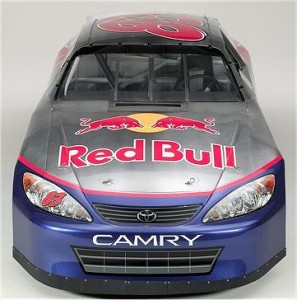 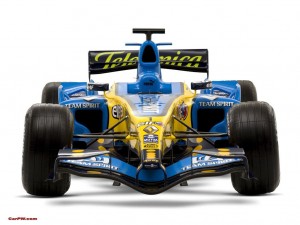 car you already see the differences, one is much wider, longer, and capable of high speeds, while other is capable of speed but smaller, a bit more refined, and better suited to handle the variety that Formula 1 has to offer. EPL teams, like NASCAR, are big tough opponents, they play direct, at when matched up against like opponents there is a big time possibility of an upset or different winners. Serie A clubs on the other hand, are forced to play tactically; opponents know who the Ferraris and McLarens are and have to adjust accordingly to compete. NASCAR’s rip around the oval banging around for a common goal, while Formula 1 car’s strategic plan moves, pit stops, and overtaking maneuvers in an effort to gain the upper hand and slowly pull away for their opposition.

When competing it is interesting to consider what would happen. One would imagine the NASCAR muscling its way around the track while the F1 car relying on finesse to find the right moment to make the pass and begin to pull away, depending on the track, each car would have its advantages and disadvantages and in the end someone would have to win the race. Well this year the big bad NASCAR style EPL teams took the cake. It is fair to say that Inter did their best to wear a bit of a NASCAR disguise, while Arsenal does its best F1 impression, but in the end Juventus and Chelsea were the perfect example. Juventus came out swinging, finessed the ball and pushed Chelsea into their rear view, but it was the unstoppable force that prevailed when finesse was no longer an option.

I understand that this analogy can be further detailed, as well as debunked a bit, but as we are left with a no Serie A teams in the CL you begin to wonder if a more hybrid style is on the horizon. Inter tried to beef up, and in the same vain ManU tried to play with English style tempo, but also control. Could it be that Serie A teams have yet to master this chameleon hybrid like playing style? As Milan fans we are accustomed to seeing Milan succeed on this stage, where our Serie A brothers have failed, is it because Milan are more like EPL teams? That thought I can’t agree with it, but I can say that Milan circa 03, 05, and 07 were very direct in their play, however were capable of coy defensive play and possession dominance. So in the end, I am not worried, Serie A will regain its throne and for the time being the EPL has won, but they still have a ways to go to put their hands on old big ears for a second year in a row.