Ok, let’s get this out of the way early. Go ahead and choose your MOTM, it is ok be honest, now after you chose Pippo we can talk. Pippo scored three goals, but his only contributions were his finishing strikes, and beautiful and clinical as they were, he was constantly offside, showed little for the ball, and didn’t even create space for his striker mate. Many times he was not even considered a viable passing option because he was not even close to being onside. Pato on the other hand created a handful of great situations for himself but lacked the finish that Pippo only Pippos sems to have.

Becks did a ton, he ran up and down the pitch, delivered passes with surgical precision, and even got his hands dirty on defense, but his tireless effort left him spent by the 75th minute and his play quickly declined from that point on. He did ever show some tenacity and aggression that only Pato has shown recently, and provided a much needed offensive mindset for team that hadn’t score a pretty one two goal in since the thrashing of Lazio. I will talk more about Becks in the middle of the week.

My man of the match was Abbiati. Yes he made some mistakes on the on distributions, and yes he spilled some balls that he should have possessed, but if you consider for one minute the three saves he made in the span of 10 minutes following Pippo’s first goal it is safe to say that this man kept us in the match. When he popped up and howled to the curva after his stellar fingertip save and his face showed all the passion, that’s when I knew that no matter the outcome this man was going to have a game, and he did. Just imagine for second if Senderos and even Paolo, yes Paolo, had not hung him out to dry, we wouldn’t even be having this discussion, but here we are. If Lippi was not a legacy man then one would think our GK, for the first time ever, would be under serious consideration for a National Team cap.

Back to the curva for a minute, Avia passed along a ton few photos, but the next two stick out the most to me. The curva is not happy about the state of the club and they have never been afraid to show it. I find a small comforting feeling in the fact that you and I all know that Fester read it. 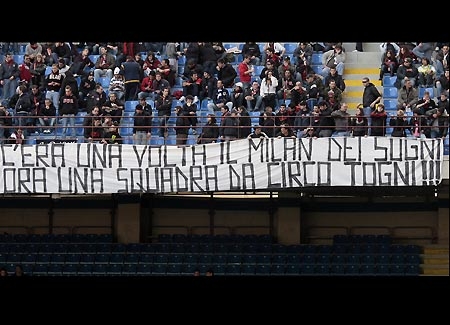 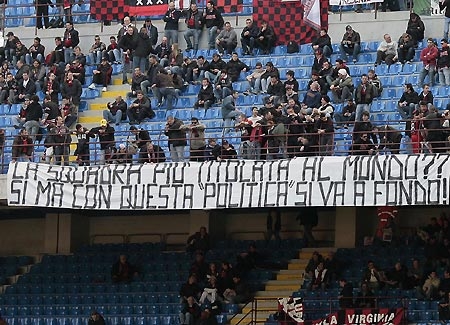 The last thing I want to bring up is the embrace shared by Pippo and Carletto, sure it was an awkward as a thirteen your old boy trying to plant one on his first girlfriend, but the fact Carletto wanted a handshake and Pippo gave him this, 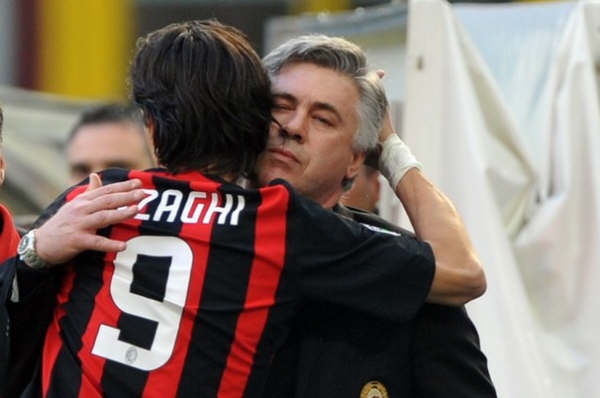 says a lot about Carletto and his relationship to this group of players. He is more than a coach, to some a teammate and to others a mentor, and in the end he has had a bad run of form just as like his players. But to say he is losing the ship is not even close, because these guys still like him, and that has to count for something.

Tomorrow, if you are all interested, I would like to pass along my homework for my coaching class. I was asked to do a tactical and technical breakdown of Milan’s starting eleven, and the results are god awful, by the looks of it they all suck. But it was an excellent exercise to help really see the team as a whole. I guess if you are not interesting, you can skip the next post in it’s entirety.