It is recaps’ following games like Saturday’s that I struggle the most with. Maybe I overanalyze, maybe I just struggle to make sense of the performance, whatever it is it leaves me with a blank stare for more than just a few minutes following the match. 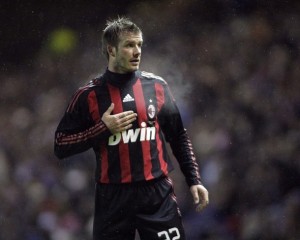 First things first, I want to give all the credit in the world to Reggina and their defensive organization and tactical execution. Defensively, no team has been able to come to San Siro and cause that much frustration and really close down the center of the box as much as they did. They came in defensive minded, and proved to be extremely difficult to beat in the back. They also read the AC Milan scouting report, which has seemingly been distributed to every bottom table club in the Serie A, and that is that Milan are extremely vulnerable on the counter attack. Reggina sat back and with one quick strike but Milan on their heels and left the Rossoneri chasing the match. This Reggina is in a relegation dog fight, and if they are able to consistently perform with that type of tactical organization than I have a funny feeling they won’t be going back to Serie B this season. Yes they were chippy, but any fan of Serie A knows that any team on any day will take what is given to them, and this was the case here.

A good performance from their opponents does not let a team fighting for first place off the hook. It is hard to find fault in any individual performances even, because no one was all that bad, but in the same sense no one was really all that good. This was a vintage performance of last season’s model, never quite able to find the accelerator when they need to, and never quite able to get that final finish when it matters most, figures that Carletto seemed to do everything right for once, while the players seemed to get it all wrong.

Many of you may defend Dinho here, and I more than happy to hear your case, but before you let the comments fly ask yourself a simple question, “At any point during Saturday’s match could you honestly say that Dinho made anyone on the pitch better?” Go ahead, think it through, and then when you hear a resounding a no in your head, you can continue. Yes he had moments of greatness, quick feet, snap shots, and good passes, but every time he had the ball the team lost a bit of fluidity that was the cornerstone of this revival. To borrow a cliché, it just looked like the guy was playing to the beat of a different drum, and that doesn’t work. If you have the opportunity, and the wherewithal to but yourself through another viewing of the match, it shouldn’t take long to notice that Kaka and Pato very rarely had interchanging play on the left side of the pitch, making Reggina’s job all that much easier. Was Dinho bad? Not that bad, especially if your focus was on him alone, but if you factor in the rest of the team around him, then you can see why he has been on the bench. We need him though, we need him more now than before, considering the opponent to come and the possible sidelining of Kaka, and maybe he will shine, but when he is on the pitch with his countryman, he does not.

Another big issue was the lack of Pirlo, I know many of us want to see a shift of dependence away from Andrea, but none of the midfielders Becks, Flamini, or Ambro was able to provide that key link that moves and the attack from back to front. Flamini’s work rate was stellar, sure he fouled like a bear out there, but he would have made Rino proud with his constant movement and first to the ball play. Becks and Ambro did not even do all that bad on the flanks, but herein lies the problem. Milan is not a flank and cross style team, they haven’t been for a long time and this was a painful example of what happens when you force a style of play that doesn’t work. Reggina forced play this way, shut down the striker, folded their hands and prayed for the best and that is just what they got, 1 point.
The inclusion of Seeforf and Pippo paid instant dividends, and for once Carletto made the right moves, but Seeforf’s sloppy play only manifested our lack of creativity on the bench. Maybe bringing Pippo on earlier would have helped, but this is all hindsight, and there is really no going back to see if will work next time. The worse part of this really frustrating drop of points was the loss of momentum, and the injury to Kaka. No more secrets as to what is to come on the weekend, but for moralities sake this little blip couldn’t have come at a worse time. 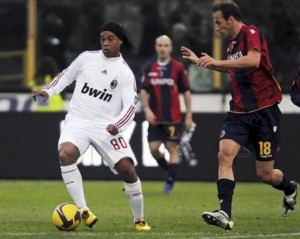 No need to sell the farm just yet, for all you Dinho fans your boy’s chance has finally come. Is he better with our without Ricky? Can he fill in when the attacking star of this team is out? A lot of these questions will get answered, but right now this tie gets pushed to the past and the focus becomes Inter.