A tale of two halves is about all I can say about Sunday’s performance in Rome. The first half was sluggish, off the ball, and all around sloppy performance that saw Milan do very little in the attacking third, but like a good boxer, the Rossoneri bated Lazio right into their trap. As they absorbed attack after attack with their makeshift CB pairing of Bonera and Senderos the Rossoneri grew stronger and the scoring opening just at the right moment. Goals are always pivotal in a match they can either deflate your opponent or force resurgence, but in Lazio’s case, it was the knockout blow as Milan poured it on late with a three goal victory.

For this match recap I want to try a little something different, and as always would like to know what you think. Instead of reviewing the team as a whole as we typically, do I want to look at the match from each of the starting eleven…

Abbiati – How much clearer does it need be, this man is leading the charge of the Milan resurrection. His placement and angle play is impeccable as he is always in the right place with little to no effort, and his point blank on the Zarate bounce shot, and his fearless snatch of the ball at Zarate’s feet were quite easily game changing plays that helped the result. It may be early to say, but Marco Amelia may want to consider watching his backside on the Azzuri bench because Abbiati is making a case for National team inclusion. For all of you who miss Dida, maybe it is best you keep that to yourself from this point forward, Milan has a new keep, and thanks to his age we solve a problem for the foreseeable future.

Zambro – his understanding with Beckham is amazing, not sure where it came from or why it works that way but they cover for each other, push forward, at intervals and just plain did his job on Sunday. Even when out of position he managed to make the tackle when the squad needed it most.

Senderos – was he spectacular? Heavens no, but he got the job done. Sure he made some suspect clearances and at times needed cover, but he seemed to compose himself and gain confidence as the match wore on. He is still awkward as they come, but remember it is just a loan and if he can provide cover while Nesta is out then fine by me.

Bonera – stellar performance easily makes Il Capitano proud, and to think Favalli was going to get the nod over him. After Sunday should become a fixture in the CB duo with Maldini, his versatility is endearing him to me and the Rossoneri faithful, glad to have back fit and hope to see more performances like this one.

Janks – much like Zambro he just seems to get it when he is behind Ambro. They cover well and now when and how to make the run up the flanks. His short interchanges with Pato, Ambro and Kaka caused fits for the Lazio left flank and if it wasn’t for DeSilvestre playing his heart out yesterday, hopefully as a job interview, then Janks would have figured in much more. There is a lot to be said as well for Zarate’s unwillingness to push the left flank.

Ambro – the goal was pure Ambro, strong dominant header. He was caught early in the first half on a few occasions but he to found his legs and started to really push the issue as the first half wore on. In the second half he filled the left center channel nicely and was key cog in the possession machine. Not his greatest performance from start to finish but he found his groove like the rest of the squad.

Pirlo – also struggled at times with poor passes, but his calm and controlled play really helped shut Lazio in the second half. He did look fatigued late, and we still lack a straight sub for the midfield maestro, but the week’s rest should do him well. I would like to see him mix it up more on the attack as he was playing much more withdrawn than normal, maybe it was tactics, maybe it was tired legs, either way it would be nice to see him more with the ball around the box.

Becks – Look I like the guy, always have, and it is no secret, but his inclusion in this squad has done wonders for the game of Kaka and Pato. Let make this as clear as possible, Becks is a complimentary player he is not the “show” and by providing the pass, cross, and flanking run he is maximizing touches for Pato and Kaka who are thriving because of it. Ronaldinho is not a complimentary and therefore he begs for the touches that are currently feeding Kaka and Pato and in a some weird way he is detracting from their game. Dinho also camps on the left, and we all know that Pato and Kaka’s bread and butter is interchange play and Becks is helping that out as well by knowing when to pull back and when to join the attack. If it was up to me Becks would be here to stay, Dinho would be shipped to Man City and Seedorf would snuggle up next to Dida on the bench. This way Becks and kaka could play behind Pato, and Rino can take his place at the RM, or even Flamini. A Milan team with that setup would look a lot like the last Milan team that won the scudetto, would it not? 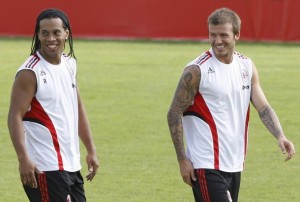 Seedorf – not sure what it is, maybe age before our eyes, but Clarence has clearly lost a step. In the process he is forcing passes and missing more than half, not to mention he slows play down to often to be valuable on the counter. He was and always has been a good soldier, but it is time he starts to realize that his value to the club may be more as a bench player, considering the current injuries/suspensions at the club, I can justify his presence but these poor performances can no longer be acceptable or glossed over.

Kaka- his goal was class, his loss of touch on his first chance was not. If Kaka’s recent run of form is not reason enough to keep Dinho on the bench than I don’t what to tell you. Many of you were heartbroken at the thought of losing Ricky to Man City, shouldn’t you be just as heartbroken knowing that he is uncomfortable on the pitch when Dinho is included! The man cleary stated he was not comfortable with the Dinho’s presence, if he is the future of the club then more than just me should be listening.

Pato – his relationship with Becks is amazing. They have an understanding on the pitch that is a joy to watch; maybe it was Beck’s time with R99 that gave him this ability with Pato? Whatever it is, it is fantastic and I am sure if you asked Pato what to do he would gladly tell you. I would like to point out that DeSilvestre played extremely well against him in the first half, and pretty much neutralized him, but as soon as the Duck started to drift out of DeSilvestre’s stomping ground Pato came alive and no one else in the Lazio defense could get a hold on him. I said it before and I will say again, please tell me someone was watching DeSilvestre!

Hats off to Lazio for really a playing a strong first half hour, they played the equivalent of a basketball full court press and rarely let Milan out of their half of the pitch. But just as we see it with the Rossoneri when you can’t make good on that kind of tactical play you will struggle to keep up the pace, and for once in what seems like ages Milan capitalized on Lazio’s mistakes, and on the greater scale Juventus’s mistakes. Six points is all that separates us from the top, but Reggina is first and until then the derby is just another match a few weeks down the road.

Let me know your thoughts on the format, positive and negative!