I did not have the pleasure of seeing the match due to my real job. But as always your comments throughout and following the match have helped shape my understanding of the game, and though I won’t be able to go in depth I do want to share some thoughts. 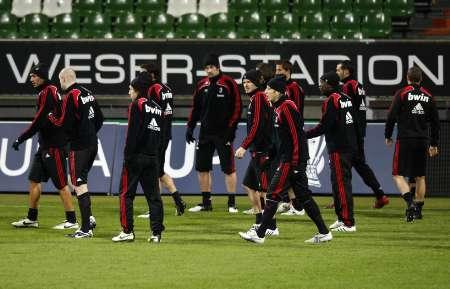 -Milan allows 23 shots on goal, today with ten of them being on frame and forcing saves from Dida. If you could hear me know I am clapping for Dida. If you had told me we would draw 1-1 with this many shots and net and Dida between the pipes I would have never believed you. From the comments it seemed he still looks a bit shaky, and we all know a GK lacking confidence is dangerous thing, but he adequately did the job and most likely proved why he is the number 2 keep, or maybe it is just because no one else is available, oh well, either way hats off to Dida.

-When I initially saw the lineup today I was a bit perturbed, I was assuming a draw, but didn’t take into the consideration the will of Pippo and Flamini. I was able to follow the game via gamecast and all I saw was the names of the aforementioned Milanista. I couldn’t believe Pippo gave as much as he did for that long, and Flamini has certainly earned himself a start come the weekend, I realized it, you realized it and hopefully Carletto did as well. This shouldn’t be all that difficult considering Ambro looks exhausted and Pirlo looks god awful.

-We all know the value of a healthy in form Pirlo, and we are slowly learning the detriment of a Pirlo who is off his game. Now we all know the XMAS tree is built around talents like Kaka and Pirlo, but when those talents are injured or off their game what needs to happen? It is clear Pirlo is lacking the space and time to operate with the injury to Rino, and that is fine, but Carletto maybe needs to use Pirlo in a more of a creative role and not dependant on the time needed in front of the defense. We all know Pirlo has enough creativity and vision to make up for the lack of it in Ambro and Rino alongside, but if Pirlo is hurting and Becks is to his right it leaves a bit of a void in the middle. Play Flamini there this weekend, flank him with Ambro and Becks and see what comes of it. What do we have to lose!

- I don’t want to beat a dead horse, and I know full well that Dinho was not 100%. I wanted to paste the entire ESPN gamecast here on the post, but it was too big and bulky, and the flash format was not blog friendly, but here is the link. The reason I wanted to post it was to show that in 45 minutes of first half soccer Dinho’s name was not mentioned once. I didn’t write the commentary, a paid commentator did, I can’t make that shit up, so if you think he made a contribution than it seems to have gone beyond me and the gentleman writing. ENOUGH ON THAT POINT. 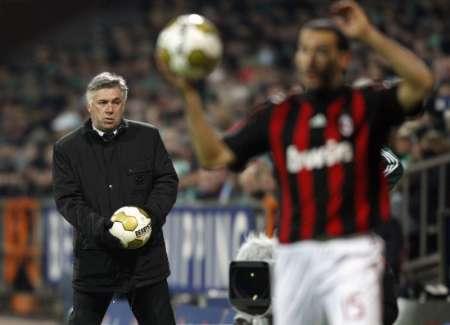 -I wanted to blame Carletto for subs on Sunday, and then again today, but then I look at the available bench and scratch my head and wonder what on Earth and coach would have done with that motley crew. Milan’s lack of depth and versatility has become an embarrassment and this can once again be placed square on the soldiers of Uncle Fester. My cousin in the boot and I had a long long conversation today discussing the likes of Abate and Antonini and how they could probably play any spot on the wings, imagine having players with that kind of versatility you can make one sub and reinforce either the attack or defense with a shift in play. Sure they lack experience, and hell they may even make mistakes, but they have pace, they can work, and they are probably willing to tackle. Sometimes that little bit grit is the difference between a win and draw, plain and simple.

On a side note many of us are torn on the commercialization of AC Milan but for better of for worse since January Milan have been in all the headlines, no matter the rag or TV program. Now it may take its toll on the players and the us as fans and that is yet to be seen, but there has to be something said for the prominence of our club on what seems like every corner of the globe. I personally hope it pay's dividends come the transfer season, but again only time will tell. I hope to elaborate on this in the future, but thought I would get gears turning with this point and then we can collectively discuss.