Share All sharing options for: Inter 2 Milan 1, It's Over...

Remove yourself from the game for one second, and take a look at the picture below. With no prior knowledge of the game, no bias towards teams, and no real bias whatsoever, the verdict is easy. 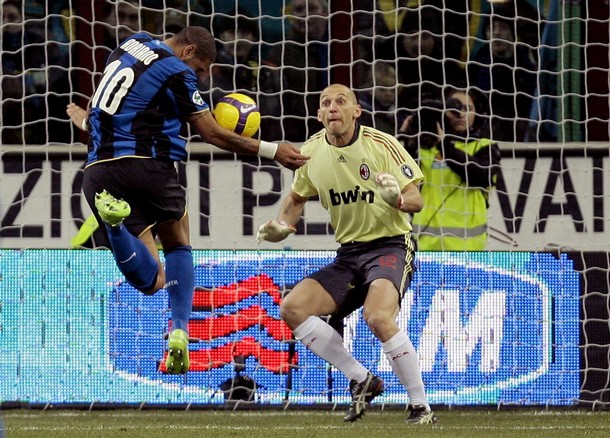 A picture is worth a thousand words, but in this case only needs to be one word, Handball! I will not say another word about it. Stank’s goal was so stout that Milan deserved this loss, and the fact that Inter did not get back on the board again is a testament to the guts of the current captain, Paolo, and the future captain Ambro.

The tone for yesterday’s match was set two minutes in. Muntari’s hard tackle on Beck’s which led to a hamstring injury so early on, that it left Milan dazed and confused. Beck’s was hurt, and much like the every other game this season, Carletto’s hands were tied. The man needed to come off, but putting Pippo on so early in the match and expecting him to last just couldn’t work. Do you make one sub, only to have sub your sub? Do you bring in Flamini and concede the attack? Do you watch Pippo run out of gas in the 75th minute? The injury hurt, bad timing, left Milan ailing, but most importantly let Inter get a taste for blood and they did not quit for the rest of the match.

Defensively Milan was not all that bad, we all know they are susceptible to the counter; it is a byproduct of a 35 year old averaged defensive line. Yes Kaladze was poor, and Janks forget that he had defensive responsibilities but when you take a glance at the roster, you leave yourself wondering who if anyone could have done better? With Paolo making Ibra wish he hadn’t been born, it was only natural that the Adriano, Stank, and Maicon would have free space that Ibra was no longer working in. Yes Adriano beat Paolo in the dribble but if you Adriano that is a must no? The emperor can’t outrun the 42 year old, but when that 42 year old is the best player on your team defensively, the defense has work to do. Credits to Abbiati as well, who many people are still razzing, but when Dida is considered “one of them” Abbiati is the real deal. 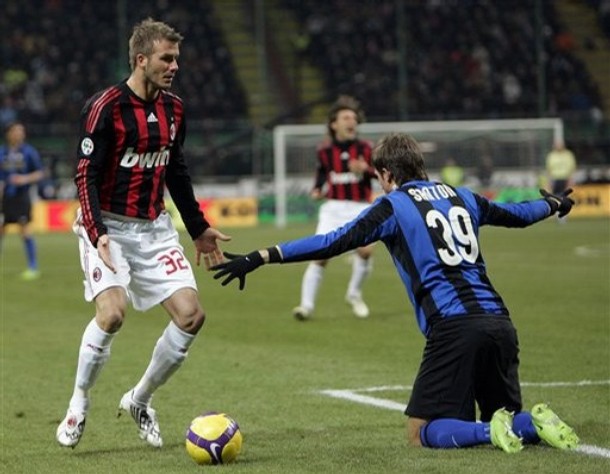 Let us speak for a minute about the midfield; there were three players in the line in front of the defense. Yes, I couldn’t believe it either, for awhile I thought only Ambrosini was playing. Let’s stop for a minute and thank Ambro for the tackle on Stank, it kept the game scoreless for the time being and let Inter know that some of the guys in red and black were here to play, and were not about to back down, it is too bad that that play was the statement play of the game for Milan…

Yes Becks got hurt, but Pirlo was nowhere to be found, and when Seedorf moved back into the line he was a lost cause as well. Seedorf was consistently a step to slow and Milan paid for it time and time again. The other issue is that when Inter moved the ball past the halfway line and Ambro was out of the play, they received absolutely no harassment and were given space to play straight down the throat of Milan’s defense. This is a byproduct of the lack of Rino, but it is unacceptable against any team, the higher you play defense, ala the Lazio match, the better off you are, it is another simple tactical issue that has been lost in the world of Rossoneri calcio.

Hats off to Pato, who did everything he could to shake two to three defenders at a time. Kid has lighting in his boots, but the poor guy was literally all alone up top. Pippo was also a breath of fresh air, but seemed a bit too little too late though no Interista can tell you he didn’t scare them. Some of you may say, hey but Dinho was there to help right? NO, he was not. I am really done even talking about Dinho anymore, he has done NOTHING to deserve some of the defense he gets here from you as fans, and more importantly his three good contributions per match do not outweigh his failures. To sum up Dinho yesterday, it takes one play, in the 85th minute; it is engrained in my brain and may in fact never ever leave my mind. It is the 85th minute and Dinho is em.barking in another lethargic attack when he is dispossessed by Patrick Vieira. The Rossoneri are down a goal and the match is waning away, any player would go studs up in attempt to win back the ball from the aging lanky Frenchman, hell Rino would have chopped him in half. Instead, what does “your” Brazilian wonderboy do, NOTHING. So you ask Gian, but it was the waning minutes of the biggest match of the year, Paolo’s last derby, the game that keeps the squad in the title race, and the chance to beat Inter twice in one season and what did Dinho do? He quit, he gave up, and he chose not to tackle, and for that he will never be forgiven in my eyes, never given a chance, and never be a Rossonero. Defend him if you want, but you may as well root for Inter if that is the road you are going to take, what he has done is inexcusable.

I had the pleasure yesterday of watching this match with my father and family, like many Milan matches we enjoyed pasta, cutlets, and salad and once again were treated to a miserable Milan performance. We all place blame somewhere else, me Dinho, you Carletto, and others Seedorf and so on. No real sense in placing blame anymore, because for me it appears that the game has moved beyond our team. The roster lacks bite on the sub, creativity is limited, and the team is no longer versatile as it was once with way to many one trick ponies and non- adaptable players. As I watched Jose Mourinho throw on his seventh defender, not once did I ask myself if all seven guys were lined up in the back? No, these players worked their way into the midfield and helped in the back, save for Antonin and Janks, this just doesn’t happen at Milan, and for that alone it seems that the scudetto is in fact an unattainable goal.