The key word of this tactics discussion is balance. Balance, especially when utilizing a 4-3-3, is imperative in a footballing sense. Balance is the glue that holds the squad together and dictates the defensive and offensive stages of the games, and in the end determines an easy win over a hard fought win, or worse, a loss. Plainly put the ten field players on the pitch need to be versatile while providing defensive pressure as well as an attacking presence. 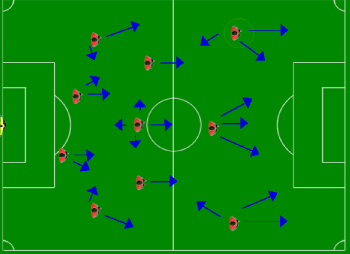 The 4-3-3 has worked wonders in Serie A, which is a mystery to me, considering the old adage of locking up the box and playing ten men behind the ball. What is even more intriguing is the lack of balance our Rossoneri consistently have on the pitch, yet still manage to get results. A good 4-3-3, in the modern era, is built around a strong CM who can tackle, intercept passes, and provide an outlet and link from defense to attack. Pirlo is just not that type of player, and I feel his struggles are directly related to this issue. This is magnified when he is playing Ambro and Seedorf, who offer a bit more of the defense/offense balance that is needed, leaving Pirlo as the odd man out when the play shifts forward and to the wings when a deep playmaker is no longer needed. Can Pirlo and Leo change the system to make this work? Sure, but the real question is does this need to happen?

If Pirlo is flanked by Rino and Ambro his value is clear, but when Seedorf and soon Beckham are alongside him, his play will continue to decline, and the need for a true CM in the mold of Essien, Toure, or D’Agostino becomes even more imperative. This balance issue is also imperative on the flanks as well. If you use the left flank as an example, with Dinho, Seedorf, and Zambro, the natural tendency for these players is to attack, with Dinho it is a must, and Clarence can hold possession but he drifts centrally which could leave Zambro higher on the pitch than needed and balance is lost. Ultimately causing the team to become weak and susceptible on the flank. This not always the case on the right with Ambro checking in behind Oddo, or Oddo tracking back (which he does do), putting the RCB under less pressure than the opposite side, which rings even more praise for Silva who has dealt with this in-balance week in and week out.

Due to personnel there is no real easy fix. You can argue that Clarence can play central with Flamini and Ambro on his sides, or even Abate, but again Pirlo is once again the odd man out; a sacrifice that after Sunday many of us are willing to make. In the attack Borriello’s balance was worth its weight in gold as he dragged defenders in and out of the box, especially Astori, who looked a man lost, and showed the pitfalls of a youthfully exuberant CB. Pippo does not offer this same type of work rate and style and the offense sputters around him, even though he is still capable of scoring the big goal; balance again becomes the issue, with Pippo being the target, instead of a cog in the three man offensive line.

So with Marseille coming to San Siro this week for the second game in four days it is hard to say what Leo’s gameplan will be. Conventional wisdom says a guarded defensive approach will be taken due to the possible knee injury of Borriello, but Leo has rebuffed conventional wisdom time and again, to his credit, so it may be more of the same, with the same personnel. Let’s just hope they can keep this heavy game pace up as the season wears on…