Let me be perfectly clear, WE WON, was it pretty, was it flowing football, and was it the best match ever?? Hell no, but when the final whistle blew Milan had more goals than Roma, in a match where a win was the last thing I would have anticipated, my terribly low expectations were exponentially rewarded. Does the win solve our problems? Not at all, we still have issues, but beating those Roma crybabies is always a plus and should be enjoyed.

Time to get down to business, when I saw Dida in the starting lineup I knew things were going to be rough. He was in fact the reason Roma fans saw glimmers of hope on any shots on goal. You can argue that the first goal was a mistake on Dida for not moving sooner off his line and closing down Menez, but Silva’s ball was HORRIFIC, and his play following that mistake was thankfully improved. To concede so early for this team who can’t score with a lead, or even up a man, was a death sentence, today that was not the case.

Many people want a youth movement and evolution from the veterans, and while it is much needed it is players like Clarence, Pirlo, Nesta, Ambro and even Dinho who remain calm and keep the team moving forward despite the scoreboard. While the attacks were poor, rarely dangerous, and often east to west the possession tipped in Milan’s favor and things started looking up. I have to admit that the 4-4-2 was a bad choice, it gave the squad width but for little to no reason, and in contrast gave Menez a fair amount of space to operate in between the midfield and defensive line. For as bad as the formation was Leo did well to move Dinho in a more advanced position relieving him of much of his “running” duties. Granted all this does is hide a glaring fault in Dinho’s game but it puts him in a more advanced position. I will take more about Dinho shortly.

In the second half Leo brought on Pippo in place of Abate, hopefully Abate is not injured, and Leo was just throwing strikers at the one goal disadvantage. Pippo made an instant impact with a header cleared off the line that many a Roma fan will forget as we touch on the next point of the match. Had Pippo scored this goal, there would be no crying and complaining and Roma fans would not have the chance to cry about their plight of bad calls and “oh how the ref’s hate us!” Nesta was brought down in the box by Burdisso and Rossetti called it, and Dinho buried it. If you want to read about a team not being accountable for their shortcomings and playing the blame game, visit the Roma blog, but I will keep my hard line as I always have, these things all even out in the end. I bet Roma fans would champion Menez for his diving antics if he won a penalty, yet they call me a hypocrite. Ambro got a red, did he deserve it? I dunno, but you don’t see me crying about it… 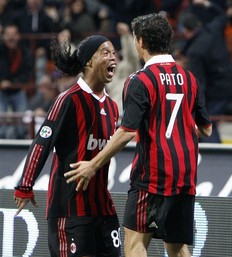 Following the goal Milan had the momentum and suddenly Ronaldinho looked briefly liked his old self. He was fervent, aggressive, and intense. His hard work was rewarded as he found Pato on an excellent run for a quality finish and a one goal lead…FINALLY…Dinho to Pato the link up we had all be waiting for since week 1. Following this play Dinho even made a cameo on the defensive end and won a tackle to boot, truly amazing stuff. He worked so hard he earned himself a rest and surely a deserved round of applause.

The fact of the matter is Milan did not have a stand out performance today. Instead they hung with it, grinded it out and got a win against team with building momentum, but not necessarily full of class. It was the type of win you build of off, you think of this as an effort in hard work and determination and hope the positives aspects come forward in the next match and the negatives disappear. It would be great to see this resiliency and the movement forward from the second half against Real Madrid, but in the same vain we need more out of Dinho and Pato, much more, and Pirlo and Seedorf have to work that much harder to keep the ball moving around the park. All our problems are not solved, but it sure feels good to get a win and I will enjoy it least for a day or two! 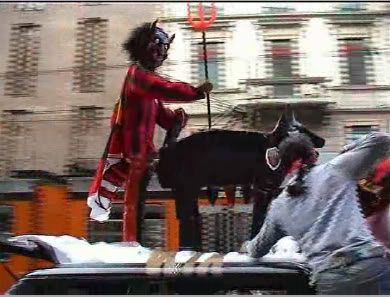