Share All sharing options for: Beckham's Second Tour of Duty

My discussion with Fadayn on a previous post peaked my interest yet again on a player that seems to be more controversial than any other in recent memory. I by no means want this post to come across as a defense of David Beckham, he is a big boy and can surely defend himself. Yes I am fan, I am OK with it, but I am by no means a fan boy and will start out by saying very matter of factly that his "celebrity status" does not appeal to me, but his business with me, and now with Milan for another tour of duty, is on the pitch and that is what matters. 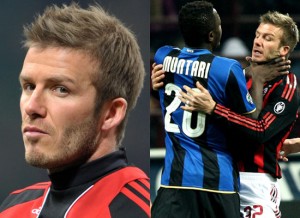 His move to MLS was arguably a flop, but the reason for the flop can take two sides. It is Beck’s fault, or it is MLS’s fault. Whatever camp you are in is OK by me, but the task of putting soccer on the map in the US is far bigger than any player, David Beckham or not, is going to succeed in. It is far worse when a league, which I do support and attend games and watch on TV and so on, does little to better the squad around him with solid players and create a team that lacked shape, leadership, and a frankly a defender worth his salt.

David Beckham is what he is, a winger, a right footed specialist who has little to no business coming inside, playing centrally, or being counted on for a slew of goals. The expectations are unreasonable for a man who even in his peak was a bit of a “one trick pony’ albeit a good one, but again he is what he is. You can count him to do his footballing duties, which many players of his lofty stardom level would not do, and that is to dig out tackles, get dirty, and work; all positives for any footballer or even an aspiring player.

What I have always found most intriguing about David Beckham is the way he plays and respects the game, again go ahead and say he does not respect the Galaxy or MLS, but in that same sentence you can also say does MLS respect MLS?? Does MLS respect the game by scheduling games the same night the US plays a qualifier…if you wanted to be taken seriously, then get serious, plain and simple. The bottom line is love or hate this guy he plays with his heart on his sleeve and for the sole purpose of going to South Africa for his country. That is admirable no matter how you look at it. In fact it reminds me of a quote from football pundit Martin Tyler, “You do not retire from your National Team, your National Team retires you.” In a day and age were players, specifically Italians (Nesta and Totti) walked away from their National Teams or worse flip flopping about wanting in or not, this guy is doing everything he can to stay on it. Don Fabio says jump, Beckham says how high!

That desire, will, and determination is more than enough for me to welcome him back to AC Milan. First and foremost he adds much needed depth, and I am not saying he needs to play every game as Carletto did last season. But any contribution would be welcome to a team that appears to be hapless souls kicking the ball about, and ANY injection of passion and heart is a PLUS. Does he have to tear the Serie A up to be successful? NO. My expectations, unlike MLS, are reasonable and realistic, contribute and help this team get some wins, if he does that, then it is a job well done.

I want to share a video that I have shared in the past, but still to this day gives me chills, because frankly this guy was special to fans, clubs, and most importantly his country…

On a side note I want to share this piece to further my grief with ESPN and American Soccer as a whole...