January 6th has special significance in the boot. While many children await Santa Clause on Christmas Eve, Italian children await a Christmas witch, la befana, who puts presents in their shoes on this day or what many cultures celebrate as the Three Kings Day.

Enough culture and biblical references because this day holds a special place for calico fans as well, this day marks the end of the holiday season and the real start of the transfer season because no one wants to work on their holiday break. For all the media hoopla the January transfer window gets, it is always a bit more bark than it is bite.

As we all know few teams want to jettison of piece of the puzzle that may help avoid relegation or climb the table, while the best teams are looking for that gap stop player that takes them over the top. This equation leads to big teams overpaying for subpar players with a flurry of lower level players making moves that none of us even bat an eyelash at.

This year is a little different, with very few teams looking poised to make any big moves, but a few big names players looking for a new home. Players like Drogba and Tevez come to mind right off the bat, but logistical homes for them really don’t come to mind all that quickly. Sure Real and Inter could use strikers, but Chelsea are Man U don’t seem the like the types to aid CL rivals. Tevez seems like the perfect fit for Inter and the Argentine faction, but selling a top class player to your CL opponent would be unheard of.

That is where the Rossoneri come in. Tevez is a beast of a player, and though he is not the big prototypical target man he blends a pacey small striker game with the ability to hold the ball and mount an attack. In fact he is very much like a Berbatov, making Man U’s current striker all the more puzzling. I propose Fester and Co. assist Man United in solving the striker problem by making a push for Tevez. I am aware that this is highly unlikely, but for a team can use a finisher this guy can be a perfect fit to play with Pato or Marco up top. 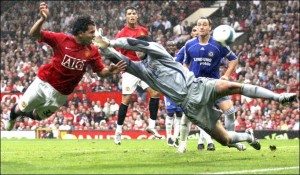 What Milan really needs are a defender, and though it is a tough spot to fill in this transfer window, Fester has made it clear that he is shopping for left back. The associated names have been exhaustive with none of them being all that likely or possible, which leads me to wonder if in fact anyone will really come. With names like Alex, Agger, and Skrtel being tossed around, I hope the Serie A is a becoming a home to EPL cast away defenders!? We all know help is needed, but if in fact it is on the way still seems a bit far off.

I won’t go to in depth in today’s friendly because it is what it is. I would prefer Milan play well all the time, but this game was a tune up and the real boots get put on this Sunday. Vacation is over fellas, time to get back to work...