As many of you already know I try to watch Milan games twice, losses especially. The second time around always allows for a more critical view, and for me at least, takes the emotion out of it. This review was a delayed because my life made a second viewing all the more difficult but I made a fair amount of observation in the first viewing to make this review fairly comprehensive. 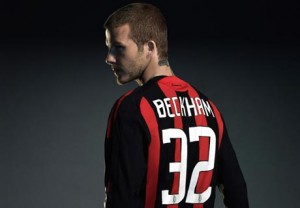 David Beckham is hungry, he is close to fit, and he wants to play football. The man proved it all in the first half, a goal, some telling crosses, and a great flank play, for a moment it was like he had been here all along. Many of you resent his off the pitch Hollywood antics, but divorce yourself from that for just a second and what do you have. A footballer who is playing his “golden” balls off to impress his coach and his new fans. Can you even remember the last time that type of passion was shown in the Rossoneri jersey, the man is playing for a spot to play for his country, plain and simple. Ronaldinho should take a minute and ask Beck’s what heart means. To digress for a bit, when Milan bought Dinho I said it would turn out like the Rivaldo nightmare, a few good games early on and then a slowly but pouty decline to the reserves. My prediction is starting to look more and more realistic, but what is even funnier is around the same time Rivaldo was brought into the mix so was Rui Costa. Difference is Rui Costa came in with fair less fanfare, far less expectations, and when it was all said it done who had the better Rossoneri career? Who said football isn’t cyclical!

Back to the Genoa match. Milan were in the driver’s seat up until the first substitution, now I can’t argue the squad didn’t need fresh legs, but I do have a sinking feeling that we could have held onto the lead if Carletto kept the rest in there. The inclusion of Flamini should have come sooner (earlier) it would have given him time to find a groove in the midfield, and it should have come at the expense of an attacking mid. Dinho was an unnecessary substitution to make, they were junk minutes and the game didn’t call for his inclusion, instead midfield hard man, heck I would have taken Emerson or even Antonini as the better option. I am not the biggest advocate on protecting the lead, the best protection is another goal, but we all know that is not the Calcio way, so we accept it the way it is.

Dinho is an attacking player, and at times he can be very good, but he was not what the lineup needed. The attack was disjointed upon his entry, and he tried to do much with possession, instead of just holding up the ball. I do not blame him for this, he wanted to impress Carletto and I appreciate that, but squeezing time off the clock was just as valuable if not more valuable than a goal. Defensively, Milan looked well organized early, but it was the late stages of the game that cost us as the gas drained out of the tank. We all thought it best for players be rotated to accommodate the 3 games in 7 days, ultimately Carletto paid for his overly brash comment that no Rossonero player needed rest.

This game was not all doom and gloom, Pato is looking more and more the part of a number two striker, and if you had a true number one things would be great. Borriello should be back, soon and the rumors from the boot say that Iaquinta has been considered as well, but the window is closing quickly for that to happen. Abbiati has cemented his place between the sticks, and for those non-believers in Christian, I remind you only of Dida’s poor performances of last season. Lastly is Pirlo, his return to form has been long in coming but his mobility, quick feet, and stellar free kicks lead me to believe that he is finding his legs once again. If one of those crossbars goes in from Wednesday evening, this post is a completely different animal.

Where do we go from here? Well Lazio for one, and considering the licking that was laid on them earlier in the season, and their loss of form you can call this match easy. Problem is no match is easy, and Lazio will be hungry for points. Milan will be without the services of Maldini which leaves me trembling in fear of the potential CB duo, anything but Senderos and Favalli! I have been checking incessantly over all the wires to see if Panucci has been bought to fill the void for the weekend, if we ever needed a versatile defender now is the time. I hate saying games are must win, but psychologically speaking they need the points, especially if Inter can rattle off another three. How we get those three points is a mystery considering that most of the eleven could use rest, but I guess it is up to Carletto to take the most in form and fit of the bunch. Never has it been so important to score a few goals early to go into cruise control for the rest of the match, a nil-nil dogfight will certainly push Lazio to favorites.