I wish I could write one of those awesome storyline type previews with Marco going up against his old team and Milan yearning for retribution from a week two defeat. This game isn’t like that though; Marco had another injury setback it what seems like a long list of bad luck after bad luck. The midweek fixture also takes a little luster out of a potentially very good match. But for me and many of you the week two loss was the low of Milan’s season and I want to some retribution. 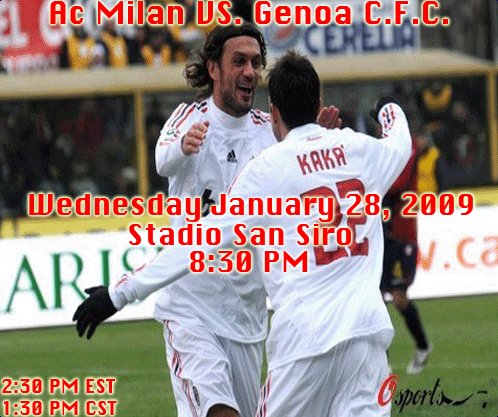 of you may argue that the loss to Juventus was the lowest of the lows, but considering that after two matches Milan were pointless, the prospects of this season were bleak, and our current six point off the lead standing was a pipedream. Milan has played well up to this point, but much like the rest of the opposition in Serie A so has Genoa. Genoa is a very well coached team with good organization and tactics, they are also a force at home as Milan can attest, but this game is at the San Siro and Milan will do well to keep Genoa from digging in and playing their game.

We constantly discuss the importance of the first goal, but it didn’t seem to be an issue on Sunday. The big thing for Milan on Sunday was that they found their groove, but also were able to disrupt any semblance of order found by Bologna. As important as the first goal is, if you can come out at home and dictate pace and tempo the Milan will find themselves in the driver’s seat cruising towards three points, but execution is key and how that is done is dependent on the lineup. Carletto has already come out and brashly said no one should need rest, but we all know with older legs it is best to keep the fresh available bodies ready to play. This would include the likes of Antonini, Janks, Flamini, and Dinho.

If in fact Carletto does decide to work in some fresh legs he could employ some straight subs with the gents named above. Janks for Favalli, Antonini for Zambro, Flamini for Becks/Pirlo, and Dinho for Dorf. He should also keep Sheva and Pippo fresh because Pato could use a blow especially if he will be asked to start against Lazio on the weekend as well. Maldini could use a rest, but the prospects of a Bonera Senderos duo at the back is frightening, it is not common to sub a CB mid match but Carletto needs to be cautious with a midweek fixture. However he lines it up, he can’t be shy with the subs, to keep the team fresh and ready to continue the assault on Inter.

As for Genoa, they find themselves very high up on the table. Borriello was a hero last season, but Milito is slowly helping the Genoa faithful forget Marco. He has proven a clinical finisher this season and if he can match DiVaio’s pace from Sunday he will cause the Milan defense some problems. The key here is damage control, a clean sheet is a thing of the past for Milan, I can’t even recall the last one!? So that means keep Milito quiet, if it means a single goal make sure it is a junker when the squad is already up three! We all know the importance of the three points, and a goose egg against Genoa on the season is a bad omen, so this is worth a bit more in my book.

I also wanted to mention and bring up the comments and discussion from the last post. If you haven’t seen it or participated please take a look, really great points and insight. I hope to expand on the young vs. old debate later tomorrow or Friday for its own post, and look forward to your thoughts on that. I know I have said it before, but I don’t say it enough I am fortunate to have some of the most knowledgeable and an insightful reader on the whole of the offside.com and discussing Milan Calcio with you is always a pleasure! FORZA MILAN AND FORZA TIFOSI!