As much I don’t want to come back down Earth, I am going to and take you all with me. Milan has a game on Thursday against FC Zurich in Zurich. We will have one of our own in the stands, with our good friend Swiss Sam, watching the match in vivo. Then the weekend comes with Milan making a trip to Cagliari. Before I recap the Derby, I want to go on a minute about the upcoming fixtures. It is imperative that the Rossoneri keep this good thing going and scoring a goal in Zurich and thumping Cagliari, no offense Jeremy, is just what is needed to keep this ball rolling.

Now onto the weekend happenings, and one of the best derbies in recent memory in terms of play, personnel, and result in favor of Milan. At one point in this match among the twenty players were two golden ball winners, national team captains past and present, world cup winners, and club legends. Really a joy for any football fan and an advertisement for Serie A that was second to none.

I will admit the game degenerated a bit in the second half, but it was a Derby, and the nature of these games are hard fought. Inter’s frustration mounted and it came out in the end, but it was a testament to Milan’s strong will and the solid game plan of Carlo Ancellotti. I know coaches are rarely MOTM, but in this case Carletto’s player choice and formation was spot on against Mourinho’s Inter, who got a nice taste of tactics and Serie A defensive football in his first loss. 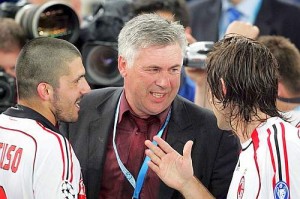 Mourinho will learn, there is no doubt about that, and you can tell he is still feeling out his squad. Cambiasso, who has a great history against Milan, seemed a bit out of place and the three striker line never once seemed to get their act together as a unit. Was it because of Milan’s solid defense? I would like to think it played a part. But this team is not yet firing on all cylinders and I hope this loss keeps them from that a bit longer.

Now onto the performances that made this match spectacular:

It was a phenomenal performance, magical in every regard and reminded again why he was and can be such a special player. His goal was fantastic, his passes were spot on, and his runs were very much Ronaldinho of old. What sold me on Dinho’s performance was his mobility around the center line and the pressure he pushed on the ball when lost or when in his vicinity. This was imperative in a game such as this and he really showed that the heart is still there. I am sold? Not yet, but I am skeptic and a hard sell, but this performance is big step in winning me over.

Was he offside, I honestly don’t believe so? I have seen a ton of pictures and replays and watched endless discussion on La Domenica Sportiva, but the way I see it, the call was a split second decision and could have gone either way. I can say I wouldn’t be in that linesman shoes when that call comes down the shoot. Kaka had a great game though and his pace really gave Inter fits, and though at times he tried a bit hard and skied some shots it was comforting to see him groove with Dinho.

Much like Kaka, Pato’s pace was stellar, but he too tried a little too hard at times. He needs to keep things simple and he will continue grow into a real player. The more he plays with Kaka, Dinho, and even Borriello the more he will gel and fit into the system.

One of his greates performances in the Rossoneri, what made it more amazing was that he always complains about playing the deep role. He can complain all he wants but his play tells a different story. Do I miss Pirlo? Yes, but Seedorf’s ability to fill that role and possibly give Pirlo a rest now and again will only make Milan stronger going forward.

Tackles and passion are the only words that come to mind. Ambro play much cleaner that Rino but their ability to get to fifty-fifty balls first really gave Milan a huge advantage in the mifield. Ambro’s dribble and fake in front of Abbiatti’s net was nerve racking but spectacular all the same, and his clear and tackle of Adriano was also excellent.

How comforting is it having a goalie who attacks the ball and actually wins it? Having a GK who possessions himself appropriately? Having a GK who makes all the easy saves and most of the outstanding ones as well? Welcome home Cristian, fascist or not, as long as you hold the sticks I could care less.

Also worth mentioning were Flamini and Sheva who did very well in possession in the dying minutes of the game, and who can forget Maldini’s last home derby.

The DEVIL IS BACK, and I can’t wait for the next game to see if we keep this going.