It is almost here...

Share All sharing options for: It is almost here...

I have been putting little notes and thoughts down about the derby all week long so forgive me if this post is scattered, ranting, and follows the theme of this derby for me which is chaotic to say the least.

I really don’t even know where to start; this derby is like no other in the recent memory. Both teams are sporting new looks, and both coaches are itching to show off their new acquisitions against their biggest rivals. The lead up to this derby has also been fantastic to follow with both teams downplaying the weekend "big game" and “focusing” on their midweek ties. With both squads coming in with six points from their last two fixtures it is safe to say that the teams are firing on all cylinders and the battles on and off the pitch will go a long way towards success.

The first and most pivotal battle:

A few weeks ago we are all down on Carletto, but lately he has shown that he is still capable of understanding his players and the needs of the team and subsequently choosing a lineup based on players in form and hungry for the win. Carletto is also very wary of his adversary and his nature to provoke matters before big games and has seemed to avoid that trap many great coaches have fallen into before him. If Carletto's instincts stay the course I believe he will be a very formidable opponent for Jose on Sunday.

On the flipside, it was not long ago that many of us were clamoring for Jose to take over the Rossoneri. As I coach myself I am proud to say I find the guy intriguing and model for what a coach should strive to be. His savvy with the media, players, and owners make him a true leader in every sense of the word and his ability to get each and every player behind starter or benchwarmer is truly remarkable. Just the other day when asked if Inter were playing well in his opinion, he remarked, “My team will only be playing when they are playing with their eyes closed.” A perfectionist to say the least the guy is a real key component to any guy team he is in charge, but don’t worry I haven’t forget that he is behind enemy lines and his failure means our success and I am all for it. I am also eagerly awaiting the press conference if we hand him his first Serie A loss!

One Striker vs. Two Striker

Our recent wins could be attributed to the two striker formation, and I would expect Carletto to keep this up despite the injury to Borriello. Let’s not underestimate the loss of Borriello, but I have a strange feeling that the man slated to fill his spot has a bit of bone to pick to with Inter’s manager. 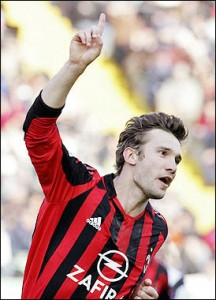 Say what you want about Sheva, but he is a Milanista and a gamer to boot, and if anyone has something to prove it is him. His 13 goals against Inter will not go unnoticed, and his desire to get revenge against Mourinho is just the cutting edge Sheva needs to return to form and help the Rossoneri going forward.

We shouldn’t kid ourselves, facing three attackers is never an easy task and it will require discipline in the Milan defensive ranks. The likely group of Zambro, Kaladze, Maldini, and Janks will need to focus on defense first to make sure that their counterparts in the Inter attack are bottled up and kept quiet. This will also put a great deal of onus on the defensive midfielders chosen for this match. Be it Rino, Ambro, or Flamini, I am very OK with any combo but leading towards Rino and Flamini, they will have to remember to cover back and play intelligently to keep Inter from spreading the field wide and dominating possession. Inter’s attack has been on the flanks, like many of Mourinho’s past teams, and it is of the utmost importance for Milan to match that width on both sides of the ball.

In the same way Milan need to keep Inter bottled, Milan must counter to the space vacated by players like Maicon, and force Inter to defend first as well. I am not expecting a goalless draw here, but scoring the first goal will prove pivotal in dictating the tempo in this match.

I do believe he should play at some point, but he should not start. This will be a game fought throughout the midfield so work horses will be needed to win balls, maintain possession, and dictate the attack. Dinho has shown his ability to make magic, but he has not shown the ability to do the dirty work necessary to win these type of fixtures. Frankly he is not this type of player and should not be expected to do this, but playing both him and Kaka means you have two players capable of the spectacular, plus two forwards, leaving the squad with one less ball winner. The alternative is to play the XMAS tree and I know many of us do not want to go there...

I hope you enjoy reading this post as much I enjoyed writing it. I also want to say hello to Johonna and the rest of her Inter groupies at the OFFSIDE.COM with whom we share a surprisignly great rapport. I hope Sunday comes quickly and with success like this: