Getting the win Thursday was a big deal. Granted FC Zurich are not a European powerhouse and would probably lose to most of the midtable Serie A teams, but a win is a confidence builder and scoring goals proves that this team still knows how to find the back of the net. What was more important from this win was the fact that Carletto diverted from the XMAS tree formation, we all know and "love", fielded two strikers, and managed to win handsomely. Will Carletto learn from this success? Past history tells us well, No!

With first place Lazio coming to the San Siro for a Sunday afternoon showdown, it is important that Carletto builds on successful performances from Thursday’s game and builds a squad capable of handling a Lazio team that I find far less of a surprise than most Serie A aficionados. Even in the Calciopoli season where they were deducted points they proved to be a team very capable of getting wins up and down the Serie A table, and after a tough season last year seem poised to continue being a legitimate squad.

On a side not, with Lazio regaining form and teams like Napoli and Sampadoria continuing to play well, this season’s Serie A campaign is shaping up to be one of the most exciting, competitive, and just plain fun to watch season’s I can remember in a long long time. Sure it is only week 3 but by the time Friday night rolls around I can not even wait for the first game on Saturday! Being a fan of football, the Serie A is making a claim for being a must-see every weekend. OK enough advertising.

Milan are 38-9 against Lazio at the San Siro with 18 draws, and though the San Siro has not been as friendly in the past two seasons as it has been in the past, Milan will need to start taking points at home if they want any chance of winning the Scudetto this season. Taking no points in any matches this season, it is imperative that they go on a streak of points, preferably the 3 at a time kind.

Lazio will not lay down though, playing well and getting a big boost from the “Zarate Kid” who has three goals on the season and his blend of pace and touch will certainly prove problematic for Milan’s aging defense. Carletto will do well to blend some youth on the squad to help bottle up Lazio’s pacy attack.

There have been many iterations of a potential lineup discussed over the course of the week: 4-3-2-1, 4-2-2-2, & 4-4-2. The bottom line to success after the failures of the past two weeks, the squad will need to be capable of offensive bite and possession. If it was up to me, and possibly many of you, the defense should feature Antonini and Zambro on the flanks who proved capable of pace, with Antonini having a great game mid week, while Maldini should partner with Senderos despite Il Capitano’s lack of form recently. The CB spot is weak and it is best that Carletto employs a veteran with a youngster back there, whatever the combo may be. Playing Bonera and Senderos, or Darmian and Bonera may prove a bit “green’ against a team like Lazio.

The midfield poses an issue as well, but the return of Rino may allow Carletto to play Gattuso in front of the defensive line and push a line of three midfielders ahead featuring Flamini, Kaka, and possibly Ronaldinho. With Flamini having a responsibility to dominate the center of the pitch allowing Dinho and Kaka to dominate the flanks while still making us strong in defense. Dinho and Kaka will need to be extremely mobile through the center as well in an effort to force Lazio’s midfield to cover and open space for the striker partnership.

Up front Borriello is a must start, but his partner can be either Sheva or Pato with the other waiting in the wings for a run on. Borriello has showed his desire, ability, and confidence. Carletto should be rewarded as the season wears on if he trusts Marco. This formation also gives Carletto a lot of flexibility with substitutions, allowing for the inclusion of Ambro, Seedorf, or Pato depending on the circumstances. Ideally you can bring in Ambro or Seedorf with a lead to help in possession or Pato if Milan is chasing the game, which I really hope is not an issue

I instead hope that we see images like these, FORZA MILAN! 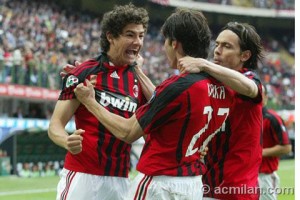