In a few days Milan will start a UEFA Cup journey that leaves me confused and a bit wanting. As I sit here and watch Chelsea vs. Bordeaux I can’t help but think where Milan would be in these group stages and if they would even have the chance to advance with the way they are playing right now. But at this stage of the season for me with no points after two matches, it is no longer about the tie or the opponent, but it must only be about the Rossoneri.

With FC Zurich on deck Milan need to prove to themselves and their fans that they a team capable of scoring a goal, gaining a lead, sustaining a lead, and most importantly winning. Basically keep things simple and try to get this squad back on track. It no longer matters who is in the starting eleven, who is injured, or who is on the bench it only matters the result and the confidence that one would hope goes along with it. 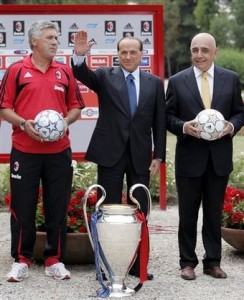 Who is to blame for the current state of affairs of the club from the picture? If you said Fester and Berlu then you’re are mostly right. As many of you know I try to watch Milan games twice, the first time as a fan, the second to analyze the game a bit deeper. My hobby has been very very hard to continue with these poor games, but as I watched the game from Sunday I saw more than a just a poor formation selection. I saw a club disorganized, players not getting involved, and responsibilities not be fulfilled on both sides of the ball. Carletto put them out there, sure, but the players did absolutely to impose themselves on the game and lead Milan to victory, a feat that I have not seen any member of this team do since the game against Man U at the San Siro during the CL Semifinal of 07.

At this point we have all diagnosed the problems that surround this club suggesting poor player form, poor formations, a transfer window that fulfilled ABSOLUTELY none of our needs, and complacency amongst the players that looks border line criminal in a group of players that have experienced so much class and success in their careers. So why not take a look at the some resolutions to these problems…

1. Play only the players on form. So your name is Ronaldinho, but you are not in form!? Have a seat, same goes for Kaka and anyone else who is not on their best game. Forget Fester and Berlu, they don’t know their face from their ass anymore when it comes to modern football and they need to take a back seat and let Carletto do his thing.

3. The transfer window did not address defensive needs so call up youth and give them a run. If Darmian and Antonini are going to sit on the bench and we are going to lose anyway, wouldn’t you rather lose knowing they got some game time? It is time to rely on the youth system that produced a fair amount of Milan legends, and if the club truly does not want to rely on the system then it is time to rebuild it to what it once was, but that is a topic for a rainy day.

4. This leads back to step one, but if a player is looking like they give two shits about the game, then take him out. This is not a time to coddle or wait and see, it is now a time to shake things up and find a group willing to carry this team forward. If it means no Pirlo, Maldini, Kaka, Seedorf, or anyone else for that matter, then so be it. They can earn their way into the team; they are all capable of this and should be made to fight for it. The era of untouchables needs to be over, I hate typing it, I hate reading it, but I had to say it.

As I say all this it is important to also realize that this team has had a fair amount of injuries with the list being quite exhaustive. Borriello, Janks, Kaka, Senderos, Nesta, Kaladze, Rino, Pippo, and now Pirlo it leaves Carletto with very few options in a season that was supposed to show limited use of Maldini as an example. But instead of wallowing in their own sorrow, it is time for Milan to make due with the inclusion of some youth in an effort to spark this team. Fill the injury voids with Cardaccio, Darmian, Antonini, Borriello and Pato. Borriello showed a hunger in the second half of Sunday’s game that needs to spread like a virus amongst his teammates; I just hope we can see it again very soon.

On a side note, watching Gourcuff in this game makes me wonder why Milan let him walk, but then again, Gourcuff seems to be in shape, in form and capable of make headway in a game, so that is probably why he was considered surplus to need.

On a further side not, I have been in some dark days as a Milan fan, but this is starting to get a little scary…