I guess the first thing I should bring up is the Chelsea debacle from yesterday. Now first thing I want to say is that the preseason is what is, and I am not going to sit here and analyze a match that will be forgotten faster the last American Idol winner. But it is a bit unnerving for any fan to watch their team implode in two games, Sevilla and Chelsea, when the season was looking very promising. I understand that team was a very skeletal version of what we are going to see week in and week out, but anyone can see that this team still has problems, as many of you have pointed out. We will get into that in a minute, but first I want to talk a bit about Fester and Carletto.

Fester was very angry today and in his own weird way he demanded an explanation from
Carletto. How does a conversation like this pan out?

Fester: What is wrong with this team?

Carletto: Well we have no healthy strikers, the collective age of the defense is older than three and four teams combined, and our keeper situation is one good, one bad, and one worse.

Fester: It’s OK, we have Ronaldinho! He is awesome right?

Carletto: Sure he is awesome, but that doesn’t address what I said before.

Fester: It’s OK Ronaldinho can play all those positions and sell thousands of jerseys. FORZA MILAN!

Do you see the problem here, this team has still not addressed all the issues that we have discussed time and time again, and the lack of depth is really what scares me the most. I am fully aware that the CL does not loom weekly as it has in the past and the full strength squad should be good right, it has Ronaldinho doesn’t it? But if Kaka gets hurt, and Dinho doesn’t rediscover his form where does that leave us?

My confidence is slim, but I am not saying we can’t make it through this. If Ronaldinho does find himself, Kaka stays healthy, and throw in Pato and Borriello things look very good offensively. But if the defense does not hold, how many La Liga type 3-2 games can we stomach as fans before needing medication?

There is no clear cut answer as to what can and should be done here. Trust me if we had an answer I am sure someone would find a way to transmit it to Fester, but depending on how you look at it some choices need to made.

First choice for me is throw all the chips on Abbiati. If we are going to spend a bit more cash before day one, it should not be on a GK. Not with Abbiati showing form, desire, and the ability to catch a ball. Give the number one to this man and let Kalac and Dida fight it out for whoever leaves first. Abbiati has proven he can handle the load, and should be given this opportunity. Why would Milan retain his rights for so long without giving him the chance to stand between the pipes?

Second choice, buy a CB. Stendardo is my first choice, but Ivanovic is fine as well. 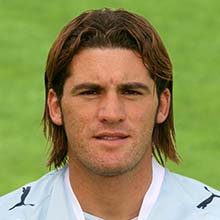 I prefer the Italian and at 27 years he is not the answer for the future, but as I have said in the past this team is built to win now and not ten years from now so a twenty year old defender looks nice, but a 27 year old is ready to roll and play right now. Plus Lazio is in a selling mode and he may prove to be a very cost effective option, as opposed to a bidding war with Inter for Thiago Silva, or the same war with Juve for Ivanovic. We are looking to buy the top CB in the world here; we are looking to get a player who can play when called upon and not pull a Digao when the game gets heated.

I am not saying Thiago Silva is not a good player, or worth the effort, but if you look at the last young players Milan have bought, Gourcuff, Grimi, and Pato. Only one has really panned out and is still with the squad. The scout team is not what it used to be, rather let someone else be the goat for once.

Third option, the bank is not bottomless and Fester is quick to remind us of the plight of Milan’s finances. So if I had the choice I would say spend the cash on a defender but that leaves us on wanting in the striker department. If Carletto is hell bent on a xmas tree formation with a lone striker and Kaka and Dinho behind then it is not imperative to add strikers so we can survive the preseason, but it is imperative that Carletto makes it very well known if in fact he does want/need striker. If everyone is healthy and firing on all cylinders then Milan would have Pato, Pippo, Borriello and Palsochi capable of filling of that spot. That is plenty of attack when all you need is one.

Even with Borriello out at the time, I do not see this as a huge issue, and if in fact Milan truly want to commit to Paloschi then this is the time. Inter proved it can be done slowly but surely with Balotelli and there is no reason why Paloschi can’t be worked in as well. Yes Balotelli is more talented, but Paloschi has an eye for goal and has more than proved his worth to the team in the short time he has been involved. I just wish he didn't look twelve...

Lastly, I do not do this all that often, because this is a Milan blog. But on a personal note I have been chosen to coach a U14 Select team where I live, and have been accepted into a coaching program this winter that will leave me two steps away from a FIFA coaching license. Very exciting for me as I have been a player, continue to play, but thoroughly enjoy coaching. I also think it is very funny because this summer some readers/commenter’s questioned my knowledge of the game and tactics, how ironic that my knowledge is better than I anyone thought. Watch out Carletto, the bench will be mine!!!!!