The forgotten man of the Milan defense was in fact as superb as the rest of his defensive fraternity. We have talked about Franco, Billy, and Paolo, but how can we have forgotten Mauro. Well I haven't. 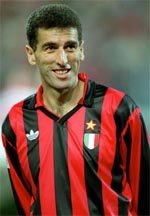 The Rossoneri’s fifth most capped player (583 all around appearances) of all time was vice captain to Franco Baresi, and if not for the number six’s huge shadow and persona, Tassotti could have easily become one of the Milan’s greatest defenders of all time. But how does a player compete with the likes of Baresi and Maldini? It isn’t easy, but Tassotti certainly gave it his best effort.

A key piece of the invincible four defensive unit that led Milan to the longest shutout in Serie A history, Tassotti not only played excellent defense but was also a very capable wing back who could fly up and down the right flank when needed. Mauro won three Champions League crowns with Milan and was able to hoist one himself as Captain in one of Milan’s most memorable wins in a European Final.

The most shocking thing for me as I remember and researched Tassotti was that he was very much overlooked because of the stiff competition he faced as a defender not only at Milan, but across Italy with the likes of Benarrivo, Apollonni, and the players before them playing at an extremely high level at the same time as Tassotti. He was not capped as a member of the Azzurri until he turned 32 which is even more of feat because he was able to play at the highest level until he retired a member of AC Milan in 1997 at the not so tender age of 37 years old. The trend of high quality aging defenders has been around at Milan for a long time, and the legacy continues.

Tassotti retired with very little fanfare, possibly because he started his career at Lazio and unlike those honored before him was not a Rossoneri for life. However, my father said something funny the other day when I asked him about Tassotti, he said that, “He did things quietly as a player and there was no reason for him to retire any differently,” You do not have to look to far for Tassotti now a days, as he sits along side Carletto week in and week out as Milan’s assistant coach and it is widely thought that he would replace Carletto in a pinch should something happen to the Milan mister. 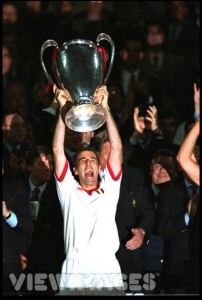 3 Champions League trophies as a player, 2 as a coach, member of the invincibles, and one of the most humble and modest Milan Legends to date, more trophies than most clubs makes him a special piece of Milan for years to come.