This has not exactly been the best few days to be a Milan fan. Another preseason loss, a ton more excuses from management, and lot more uncertainty. Just a few talking points to carry us through another week, I just wish Milan would pass whatever meds Fester is on to us so we can live in bliss of thinking this team is A-OK.

-The Kaka rumors continue and a lot of us are dealing with it differently time and time again. I have waivered, considered, and reconsidered but all the sign points to the fact that Kaka needs Milan, and Milan needs him. If Real would just sell Robinho to Chelsea this would be all over, sooner and make us feel better.

-Speaking of Chelsea, Ivanovic’s agent says that a deal is very near and his client will choose Milan over Juve. Quite frankly I do not care who the heck Milan get to fill in at CB, but it has to be someone. It also has to be someone soon because…

-Dario Simic’s Rossoneri career is over as heads for Spain. Thanks for the good times Dario and best of luck on your new endeavors.

-Our old pal Abate looks great at the Olympics in his limited role, and his making the most of his chances, but there is one kid who is showing all the skills. Forget Giovinco, Rossi is on fire, and the thought of him alongside Kaka is pure joy. He can play on the left, right, or center of the pitch and he can shoot from almost anywhere and does. Not only is he loaded with talent and potential, the kid is a Milan fan and loves the team. The only real issue that is forgetton time and time again is that he is owned by Man U and Sir Alex, and that is a tough nut to crack. Can you imagine him playing alongside C-Ron, why is he not at Old Trafford, send him to San Siro.

-Speaking of the Olympics, Pato is doing his thing, but Ronaldinho still has not convinced, and I know many of you will argue this point and you are more than welcome too, but hear me out just for a second. When Dinho was at the top of his game, he played with an almost boyish excitement. The man would effortlessly cut it inside, outside, and inside again and he would crack a shot on net and score goal after goal, time and time again all with an ear to ear grin that made you want to pick up a soccer ball the minute after you watched him. The bottom line is Ronaldinho was loaded with passion; he played not for money and trophies, the man played because he looked like he enjoyed the game. I don’t see that smile anymore; I see a man who looks labored, and borderline lazy. I also see a man who has forgotten what is like to play simple and play beautiful, his brief flashes of greatness this tournament have been sparse compared to his errant passes and his attempts at playing to flashy. The last game Pato had to come back to the center circle time and time again to retrieve the ball because Dinho was in the offensive third with his chair out waiting for the ball. 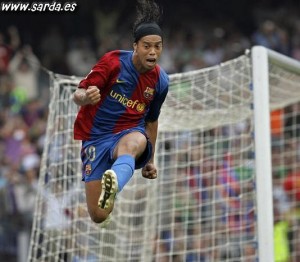 Pato and Kaka can’t do that game in and game out for Milan, way to much pressure on them, and they will fade by March. He has to step his game up, please don’t call me pessimistic, I want it as much you do, but I am still far off the bandwagon.

-Maldini was interviewed today, and he blamed lack of offense and depth for the woes of the Milan preseason. The man is in his 21st preseason and you have to think that he has seen it all, I wish at times he would let loose and tell us what is on his mind. He is such a professional that he it is probably not in his DNA, Paolo you are a better man than I. 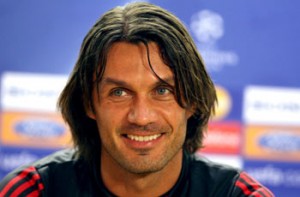 -Lastly, our friends Fetyani, Penny, and Moka all have awesome player blogs for Kaka, Dinho, and Pippo. Check them out when you get a chance, it is top class stuff.

-Stay tuned for a postional breakdown and season preview as the season gets closer...