Elite (also spelled Élite) is taken originally from the Latin, eligere, "to elect". In sociology as in general usage, the élite is a relatively small dominant group within a large society, which enjoys a privileged status envied by individuals of lower social status. 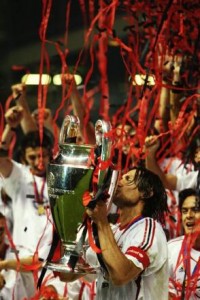 The position of an elite at the top of the strata almost invariably puts it in a position of leadership and often subjects the holders of elite status to pressure to maintain their position as part of the elite. However, in spite of the pressures, the existence of the elite stratum is usually unchanged.

When talking about elite players arguments stem from all fronts. Every fan wants one of their player’s in the elite strata, every fan wants to know their player stands past present and future as the best player to play their position. Though many of us may argue that Milan has had more than one player in this class, I challenge anyone to argue that Paolo Maldini, now and when he is all said done, is in the class of the elite.

Every generation or so a player comes along who not only captivates every fan of the squad, but grabs hold of the attention of the entire world and forces them to take notice. This player takes his position and turns it on his side, doing it better, faster, stronger, with less effort, and more excitement than anyone before him. That same player brings comfort to fans, and fear to his opponents when they see him on the pitch. Though he needs no explanation, defense, or discussion, one can not help but stop and admire how truly amazing Paolo Maldini still is and has been.

One last addition to the resume, for any elite player, and Paolo is no exception. Is the respect that he carries across the globe for the classy player he is. He is widely known as one of the most family oriented, non-glamorous, and humble players to the play game. But what sells me the most is when a movie was done about Paolo’s playing career that some of the world’s greatest players turned out, ie Zidane, Ronaldo, and Roberto Carlos, to just plain discuss why he was so hard to play against, and just praise him for the top class calciatore that he is. 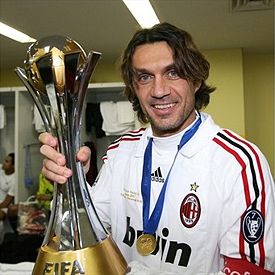 If you didn’t notice I portrayed Paolo as an elite player without mentioning a single award, accomplishment, stat, or trophy. Just in case you weren’t sold on Paolo and you are a numbers person, these won’t do anything to disway you.