The summer gives us a chance to do things that during the regular season are impossible because of the constant musings and buzz surrounding the Serie A. So with news being slow I want to do something that I have wanted to do for quite awhile, but really have not had the chance or time to sit down and get it right, but alas here it is. 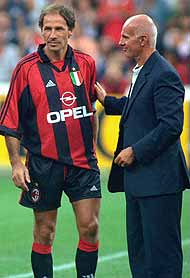 Arrigo Sacchi does not get anywhere near the amount of credit and respect that he deserves in the football world, but more importantly many people do not even know how influential he has been to Calcio as well as global football as a whole. The Rossoneri are currently a little over ten years that Arrigo last stood on the sidelines, but his legacy will linger for many years to come as I hope to show in this post.

Sacchi was arguably the most successful manager at Milan, winning scudetti, CL trophies, and kicked off Milan’s famed 58 game unbeaten streak(thanks IceMan). Believe it or not those records do not even say all that much when you think about the changes he brought to Calcio, including the reinvention of the wingback, the use of a sweeper/stopper, and the impenetrable defenses of Milan of the early nineties. Sacchi was also the leader of the greatest club team ever assembled in 1989-1990 (voted by many media outlets, including UEFA) with the likes of the flying Dutchman, Maldini, Baresi, and host of other players who have gone on to superb careers.

Sacchi’s only blemish on his resume was his inability to win the big game in 1994 when he led the Italian national team to the final of the World Cup. We all remember how that game went, but he lost with his best gun, Roberto Baggio, on the spot, for what was an excellent tournament for Italy. He went in and out of coaching after that loss, sat on the Milan bench once again, served on the board of Real Madrid, but none of this can shake his career which is cemented in the legacy he has created.

In American Football you constantly hear commentators discuss how coaches are spawned and taught by other coaches who create family trees throughout the sport. Well Sacchi is soccer’s answer to someone like Bill Walsh or Bill Parcells. If you look at his Milan roster you can’t help but notice how many players have gone to become successful coaches in their own right. 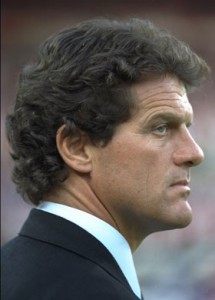 His first and most prominent pupil is Fabio Cappello who now roams the bench of the English National Team. Cappello is no slouch himself as he coached the back end of Milan’s unbeaten run and led them to even more trophies and scudetti in his years in charge. He also led Roma, Juventus (titles revoked), and Real Madrid to success on the domestic fronts as well. The crowning jewel of Cappello is that he now leads a country who has constantly criticized the Italian game and they are now playing it. Pure irony.

The Don is also a pupil of Sacchi and unlike his mentor could not replicate success on the international stage. His tenure was strong, but not strong enough, with an early exit from Euro 08 and unable to “fulfill” his contractual obligation to the FIGC was relieved of his duties. But if he is anything like he is mentor he will be back on the sideline in no time. 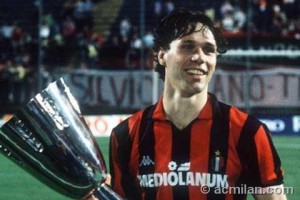 Another pupil who has gained prominence on the International front is a member of the flying dutchmen Marco Van Basten who led the Orange of Holland to the quarters of WC06 and Euro 08 where he led the Dutch some of the most exciting fast paced football I have ever seen. Problem with tearing through the group stages like the Dutch did, it leaves you no room for error in the knockouts, and when Russia came at them in the Dutch style, Van Basten had no answer. With that endeavor finished Van Basten will embark on a new challenge at the helm of Ajax with the idea of returning the club to greatness, and back alongside of AC Milan as one of their fiercest rivals and partner clubs.

The other two members of the famous dutch trio have also tasted a large amount of success with Frank Rijkaard winning La Liga and the CL title with Barcelona and was touted as putting together some of the most beautiful football ever played in Europe while in charge of Rivaldo, Ronaldinho, Messi, Eto, and the rest of the Barca players.

Ruud Gullit moved onto to Chelsea and Newcastle, but is now roaming the sidelines of MLS with the LA Galaxy. 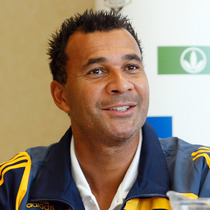 Gullit, granted is playing with a stacked deck, with the likes of Beckham, Ruiz, and Donovan, and success seems almost imminent as that team begins to learn his style and system in the American game.

Back to the boot now and the current Milan sideline where both Carletto and Tassotti roam, and have led Milan to two CL titles and one scudetto and hopefully many more during their reign in the future. Carletto has rekindled the strong Italian base at Milan that was created by Sacchi and you can only hope to think the likes of Paolo, Cafu, Costacurta, and even Kaka will someday go on to be coaches and the trickle down effect of Arrigo Sacchi will continue for years to come.

Just when you thought the Sacchi family tree was done, there are still more. I still need to point out Albertini who is in the upper echelons of the FIGC, Italy’s governing body of Calcio, and lastly who can forget the legend Franco Baresi, who runs teams in Milan’s youth program, the primavera. We also must consider some of this Azzurri boys coaching like Casiraghi, Zola, and Vialli as well. As you can see the list is almost exhaustive, but you can continue to link players to Sacchi time and time again. It is hard to find success at Milan, or elsewhere that has not been graced by the touch and class of Arrigo Sacchi.