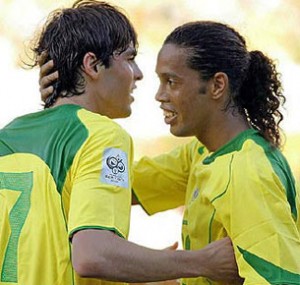 We all know that in the past I had advocated the sale of Kaka. Though at times I have believed it and even wished that it would happen so that Milan could reap the financial benefits, I no longer believe that it is in Milan’s interest with the current climate at the club. This club is now built around the ability and proficiency of these certain Brazilians to work together and produce, and though I am of the school of thought that this tandem of Dinho and Kaka will find it very hard to have a fair amount of touches to impact the game, and make it harder on each other to succeed. I do not believe that selling Kaka would be the right route to take.

Kaka, is a very different player than Dinho, and if you had to make a comparison, Kaka is a like a turbo charged version of Dinho who can blow by you instead of fake you out of your shoes. The speed of Kaka was on display at the CL in 07 and that ability is a cornerstone of Milan’s success through the link up and ball movement of Pirlo and Seedorf. Bottom line, Kaka is a very important piece of Milan’s puzzle next season, with Dinho taking the role of Seedorf as a middle man.

I also don’t believe that the inclusion of Dinho, is worth the sale of Kaka. How many of you would prefer Dinho or Kaka, I doubt Dinho wins that vote. Kaka is faster, younger, with more upside, and is all around a more humble guy and team player. Ronaldinho is a bridge to the future of Milan, Kaka is the future, and for that reason alone is of more value to the club that Ronaldinho.

Now rumors are rumors, and they are part of the transfer season, and have never been something that as Milan fans we have not been immune to. So this Chelsea is nothing new and very much akin to when Sheva left town. The only real difference here has been the desire of Scolari and the shear volume of Abramovich money coming Milan’s way. I mean if this deal went through it would go down as the single highest monetary transfer in history and make Kaka an extremely well paid player.

The other thing that is making me even more sour about this whole thing is the caginess of Kaka and his people about the deal. A player can say whatever he needs to make the media and so on happy, but we all know that if money is on the table, and the player is not happy he can walk away. Watching Sheva walk away was more than a lesson for me.

The last problem driving this issue for me is Fester. This guy has completely lost touch with the needs, goals, and desire of this club. First, he claims he bought Dinho to sell tickets, which is a big point of issue for me and makes me sick to think that ticket sales dictate our transfer policy. Two, he claimed that selling Kaka would solve Milan’s money problems for a few years to come. Three, he loves to tell tall tales and string the tifosi along time and again. Sure he succeeded Dinho but what about all his other empty promises.

I do like Kaka, but he is not my favorite player on the squad, I have no problem admitting that. But I understand the importance and value he has to the squad, formation, and future plans of the club. The sale of Kaka would basically mean that this team is set to rebuild, but with the Fester in charge that process would be as painful as we have ever seen. He has lost touch with the current game and I firmly believe he no longer has the ability to buy an up and coming player like Kaka, without first seeing the kid plastered on someone wish list.

I am scared, and I don’t know what to think, so the sooner this is over and the season starts, the better off we will all be.