I just don’t really know what to say anymore. These past few days have been extremely taxing on me with all these Dinho yes, Dinho no, Adebayor yes, Adebayor no, and so on. We all know how I feel about the whole thing, and I am slowly doing my best to rationalize and digest the potential move of Ronaldinho to Milan. The problem with my rationalizing is just that, I am to rational. I watched Joga Bonito videos on you tube till my eyes dried out, watching Ronaldinho do things that one can only hope to duplicate, but no matter what I watch I just can not come to grips with this man’s presence in the red and black.

The real only plus I see at this moment and time would be the possible financial windfall from his face being plastered on everything again, and the Milan logo right next to him. I also see Milan becoming one of the first place where Nike branded players, Pato and Dinho, will co-exist on an Adidas sponsored team. One has to imagine that image rights and so on are being fervently discussed behind the scenes as we speak, so that both brands are well taken care of. But once this notion of marketing glory fades, I can’t really find happiness in anything else related to this move. I do know that many of you are for it, and I respect that, and ultimately if he does arrive, I will have to do my best to come to grips with the idea, but I certainly do not have to support him early on. He will have to earn that like many of the Rossoneri greats before him, even Pato has yet to fully grow and develop for me, but unlike Dinho, I can’t wait to see the heights that Pato may reach.

My biggest issue that stops me in my tracks every time is the fitness and form. The Ronaldo, R9, situation has left me so jaded that after seeing the last pictures of the once superstar, made me almost feel bad for a man who has literally fallen from the top of the world. 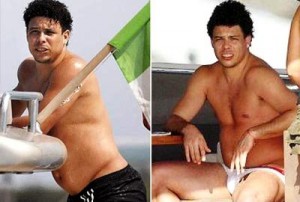 With that kind of decline health, how can one ever hope to get their body back to where it was meant to be, but even worse what is there to stop these guys from taking things to the excess and ruining careers that have already achieved more than most before the age of 30. Adriano, Ronaldo, and now Ronaldinho have shown that when the going gets tough, these guys get fat, plain and simple.

The other issue that for me is that as a Milan fan the club comes before any player, except of course Paolo, who in my eyes is the foundation that the club is currently built on. With that being said a move for Ronaldinho may make sense off the pitch as I stated above, but on the pitch it leaves me wondering and scratching my head. For me the development of Pato is a very important part of the Milan plan this coming season, as he needs to continue to grow into a viable striker. The best way for Pato and Milan to do that is to pair him with a veteran type striker, or a big time point man. This takes pressure off Pato, allows him to roam around the box, and helps him to continue to grow. Pato for me is more than just an out and out striker; the kid can hold and create, and at times plays in almost a hybrid style of Kaka and Dinho combined. Pato is a special player, and I can’t even begin to tell you how angry I would be if the arrival of Dinho affects his ability now and in the future, or worse disrupt the locker room.

Speaking of the locker room, I would expect Clarence to ask for a transfer in the days following the Dinho deal. The only logical place for Dinho, at least for me, and clearly for Carletto as well is to be slotted alongside Kaka in the second to last tier of the xmas tree. I would rather that spot for Pato, but clearly it will be where Dinho roams, and if Clarence who occupied that spot in steller fashion last season loses it to a player who is a out of form and fitness, just because he is Ronaldinho, is a disgrace to a consummate professional, and I would support Clarence wherever he decides to finish his career. Arsenal anyone?

Ronaldinho in that spot also leads me to my final point, in WC 06 Brazil seemed to have a very hard time getting the ball in gear in the attacking third. Too many cooks in the kitchen really, and I do not see that as that much of an issue at Milan because we only have Kaka. But having Ronaldinho will either relieve Kaka of some offensive pressure, god I hope so, or render a bit of a Brazilian ‘06 syndrome of not having enough cohesion to make this work. In all honesty they are both great and I do not see it as much of a problem because Dinho worked well with Iniesta and Xavi in the Barca heyday, but the chemistry of this team is all to strong to going ruin things because of one guy. One does not have to look to far to the last Brazilian who did nothing but bitch, and we all know where he ended up. Actually most people don’t because Rivaldo ended up in the obscurity of Greece…

I don’t want Dinho, I can’t make myself want Dinho, but I will try, because for the good of Milan that is what I should do.