Last weekend we talked about Sacchi, and Alessio over at Juve did a great piece on Conte. I thought what the hell, why not get a break from the ulcer causing transfer rumors on the weekend and talk about Milan legends. Add your stories and memories, and if you want to take up one of the greats, let me know, and you can send me your piece, and I will gladly post. 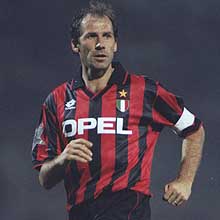 In 1976 our Interista cousins were presented with two brothers, both defenders who had a ton of potential, and both were diminutive in stature. Inter chose Guiseppe who went onto to make close to four hundred appearances in the blue and black. Left behind, however was younger brother Franco who moved to the better side of town and joined the Rossoneri.

Baresi cracked the first team in 1977 playing his first game for Milan, and went on to make 532 appearances for the Red and Black. In twenty seasons Baresi averages closed to 25 appearances a year for Milan, playing the role of sweeper, captain and all around general of the back.

Bust like most Milan legends, stats alone don’t tell the real story of the Milan number six. You had to watch him in action to know exactly what made him special. For the past twenty years we have been spoiled with Maldini and his offense runs up the flanks, and his phenomenal tackles at the touch line. With Baresi the runs came right up the gut, and the tackles happened wherever an offense player dared to touch the ball near Milan’s penalty area. What Paolo, perfected with the slide tackle, Baresi did standing up. I remember watching a match in which Hristo Stoichkov came barreling down the pitch, if anyone is familiar with Stoichkov you know that barreling is the perfect analogy, and Baresi so calmly dispossed him that Stoichkov barely even noticed he had parted ways with the ball. That summed up the defensive prowess of the Milan sweeper.

Sweeper is another thing that gets taken for granted when we talk about Baresi. The whole notion of a sweeper is lost with the current setup of four fullbacks, with the two centerbacks holding back as almost dual sweepers. Baresi did this alone staying with the last man but never declined a chance to go forward and get into the attack. I remember when I first started playing this game in an organized fashion and people will talk about the sweeper and its importance, and I couldn’t help but smile knowing that Baresi was the sweeper that every aspiring kid should play like. My father who coached me back then even employed a sweeper, it was not me, but the kid was lights out as we went on our own mini-invincible run.

Success is also word that is synonymous with Franco Baresi. Only Maldini has won more games in the Milan shirt than Franco Baresi, more scudetti , and more trophies. But before Maldini there was only one and that was Baresi. No captain has seen the success that he has seen, not even Paolo, and that just goes to show how special a player, and teammate he really was. Like his mentor and coach Arrigo Sacchi there is one success that eludes the great number six, and that was the World Cup. Baresi, who could barely walk in the final against Brazil, stepped up and missed his PK which ultimately led to the loss to Brazil. I will never forget his tears that day as he handed the armband to Paolo, and effectively ended his career as a member of the Azzuri.

Baresi would give three more years to the Rossoneri, but even that had to come an end. It was a game and a day that I will forever remember. The clip below does not do it justice because of the pure emotion that was involved. But the words of Silvio Berlusconi will ring true for while, “Selling Franco Baresi would be like selling the flag of Milan itself.” Even ol’Berlu shed tears on Baresi’s last day, and with those tears Berlusconi bestowed the ultimate honor that few if any players in soccer ever receive. The number 6 of Baresi was retired at Milan, and still to this day no player on any pitch wearing the number six goes by without getting an extra look from me, wondering if he or she knows the significance of the number that hands on their back. 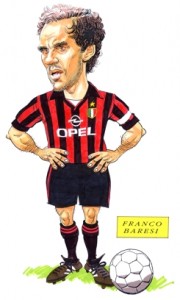 Baresi started a tradition of one man, one club, one captain, that Milan is fortunate to continue with to this day. For close to 30 years Milan has had the strongest, continuous, and successful stretch of Captaincy that no club has even come close to. It is amazing how fortunate we truly are, you can say whatever you want about Milan, but that is something that no one can take away.

I leave you with this great video; again it doesn’t truly do it justice.