The Eve of the Transfer Window

Share All sharing options for: The Eve of the Transfer Window

In just a few hours the transfer window is going to open across Europe. What was once a very exciting time for Milan fans with the additions of players like Weah, Baggio, Sheva, and Rui Costa, has become a nerve wracking nail biting few months that have seen us add poor players like Oliviera. What happened to a once powerful juggernaut of the transfer period in the past few seasons? Complacency seems to be the biggest culprit, but lack of throwing cash is another. Milan was once a force with the checkbook and despite CL and World Club Cup victory the money has not flown, and the lack of aggression in the transfer market has proved very costly with the losses of players like Torres, Suazo, and Henry.

This year Milan can erase those bad memories that have left us sour and really disappointed in our team’s inability to sign the big name, or the future star. Though they have already lost names like Maggio and Dossena who were favorites of us here at the Offside they are still in the running for some of football’s big names.

Since my first day posting it is no secret that I have been highly critical of Milan’s pursuit and courtship of Ronaldinho. I almost feel linked with Milan’s pursuit of the newest portly Brazilian. 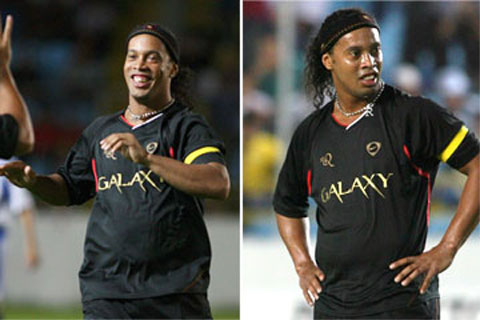 Many of you have defended (Shehan did so quite well a few posts back) the once and former King, but I still can’t justify this pursuit. I am a positive and negative type of person and the positives just don’t outweigh the negatives. I know he was once on top of the world but haven’t we been burned by past Brazilians enough in the past. Haven’t we as fans learned our lesson, and the Milan brass heard the old adage, “Fool me once shame on you, fool me twice, shame on Milan!” Didn’t Rivaldo and Ronaldo leave us worse than we started, can we really go through this again?

Speaking of positives and negatives, Mr. Adebayor is slowly starting to make himself unwanted in my book as well. His constant back forth I love Milan, I love Arsenal, maybe I love Barcelona has absolutely driven me mad. I was all in favor of Adebayor a week ago, but now I am left with a sinking feeling that may see him off to the Catalan giants, do we have to lose another striker to Barcelona!!!!

The one good thing that would come from Adebayor to Barcelona is that Eto may once again be a legitimate target for Milan and depending on how much Barca has to pay for Adebayor, may make Eto even more expendable, and keep Dinho at the Camp Nou. I am not all that keen on Eto because there has been a lot of talk that he was one of the guys in the Barcelona locker room who was making things very hard for Rijkaard in the final season. But he is talented, and at this point may be one of the last options that Milan has to upgrade the attack.

Let us digress a bit about the attack, and why I feel it is still an important spot for Fester to address. We are putting a lot of faith in Pato who had a great first year, but if we want Pato to reach the heights of Kaka, it is important that he progresses as cautiously as Ricky did in his early days. With that said he could really use another striker to help take the pressure off him and Borriello who will most certainly be the center pieces of the attack, with Pippo on the bench. (I am not even going to address Ronaldo as a potential option here.) The other point I want to add is that Pato maybe the perfect partner for Kaka behind the lone striker because of his creativity, comfort on the ball, and versatility. He showed his ability to come back and receive the ball, and I can only see good things coming from a quality point like Adebayor, Eto, or the man that has fallen under the radar Didier Drogba.

DDrogs, is still on my radar, and I can only hope he is still on Fester’s as well. It is becoming apparent that if things need to change up front that Fester is going to have show he is capable of bringing the big signing home to the San Siro, because he clearly isn’t scouring the youth lists for the next best thing now is he?

As for bolstering the defense, it would be nice, but seeing the self imposed Milan budget the way it is the attack needs it first. Can you remember all the close games that left us wanting or needing a goal, and no one there to score it? If Janks and Oddo come back healthy, and Zambro able to play either flank, I think we can make it one more year.

A little more Azzurri banter, I promise it is almost over. But DiNatale was very complimentary of The Don and gracious for his chance to play, and I thought it was finally a refreshing view for a guy who has not gotten much praise in the past few days. He was also very complimentary,

“You can’t judge a Coach on a game that was lost on penalties. Donadoni did a good job, but these decisions are made by other people.

“Obviously, if I had scored other goals things could have been very different.”

Despite his sadness at Donadoni’s exit, Toni admitted that he hasn’t spoken to the former Livorno boss since his dismissal.

“I am not a player who stays in contact with Coaches, even though I had a great relationship with Donadoni, as I did with Marcello Lippi,” he said.

*One last thing, thanks to Tito for the link, but the folks at Reuters Soccer blog seemed to have wandered by the Milan offside. A quote about my "most favorite" DM who was named to the flop team of Euro 08:

"Daniele De Rossi was supposed to be the purring engine at the heart of the Italian midfield but instead operated like a Vespa on the wrong fuel and walks in."