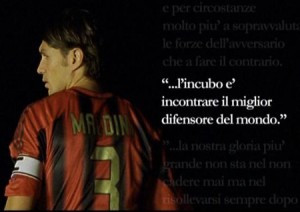 Paolo Maldini has officially extended his Milan career until June 30, 2009, announced the club.

The 40-year-old captain had originally stated he would retire at the end of the 2007-08 campaign, but reconsidered despite injury problems.

This evening the Rossoneri released an official statement confirming that Maldini had put pen to paper on a new contract “until June 30, 2009.”

It was not an entirely unexpected decision, as earlier today general manager Adriano Galliani had hinted a deal was in the offing.

“I hope Paolo will accept the club’s proposal. I sponsored him to continue playing. It all depends on Paolo, the decision is down to him.”

The new contract extends a glorious career that has seen Maldini notch up over 1,000 official games between Milan and Italy.

By the time this new deal expires, Maldini will be aged 41 with 25 top flight campaigns under his belt.

Great piece courtesy of the folks at Calcio Italia.