Disclaimer: If you want non-biased, coherent, level headed assessment of the Azzurri performance at Euro 08 than you may want to come somewhere else. But if you can handle some harsh criticism and soap box ranting specifically aimed at ToniNoGol, Roman Midfieler’s, and anyone else in a 50 mile radius of the Azzurri than read on. My apologies in advance if you disagree with any of my opinions…

The first thing I want to do is discuss the spot kick that in this case determined the outcome. The shooter has the advantage here, and when a goalie saves it don’t ever praise the goalie, scold the shooter. Remember you are expected to score here. With that out of the way DiNatale and DDR screwed up, why not get ADP to shoot sooner is beyond me!?

I have been fairly uncritical of Donadoni in his tenure as Azzurri coach because the expectations put on him with a fairly old squad, following a glorious 06 run are/were extremely unreasonable. I did not think this group of 23 is all that strong, in fact with the form of many of these players coming into this tournament, the actual performance of these players was not all that far off, especially with the likes of Rino, Pirlo, DiNatale, and Borriello cooling off at the end of the Serie A campaign. I will say that his brash honesty, playing his system during qualifications, and choosing whoever was in form was all lost after the Dutch disaster, and his lack of intestinal fortitude to stick to his guns really made upset. I would have benched Toni in minute 46 of game one, and part of me wants me to believe he would have too, but his lambasting would have been longer and harder than anything he is going to face in the coming days. That team was built to work around “Europe’s Best Point Man” no idea who anointed Toni with that title but the ESPN folks were using quite liberally, little did the team and coach know that Toni would go non-existent when his team needed him most.

Another painfully apparent thing that I saw yesterday was Cassano seems to have no connection with Toni or anyone else really. This team lacked that gel that was so successful in 06. Lippi got a lot of credit for 06 but the squad was in sync, motivated, and on the top of their game. You could have put Roberto Mancini in charge of that bunch and they would have won the World Cup, they had something that no Italian team I have ever watched in my young life had, and that was hunger, those guys looked like world beaters and no matter who was on the pitch they made the pass and picked each other up time and time again. It is this fact alone that makes me think Lippi is not the answer to take over again because this team needs young blood and new look, and the fact that Lippi has been “lurking” in the shadows added even more unneeded pressure to an already impossible job. Best thing for the Azzurri is if Lippi gets job elsewhere, be it club or country, and someone like Casiraghi, Spalletti or Carletto are brought in. I am not opposed to sticking with Donadoni, but the real man for the job for me is and always has been Fabio Cappello. To bad that isn't going to happen anytime soon.

I want to get into player performances’ a bit here, and would like to first thank Buffon for keeping this team in these games and playing at his usually high level of play. For me the stud of this tournament was Chiellini. He may have hurt Canna, but he did make Canna proud and saved many a ball and tackle yesterday and the games prior. Never have I seen a player with the perfect blend of Canna and Nesta until I watched Chiellini as closely as I have at this tournament. I have told Alessio many times that I am envious of Juve’s young Italian talent and Chiellini for me takes the cake. The potential thought of him in Red and Black probably makes Juve fans cringe, but for me it would be a superb signing. No other player really stuck out for me, but I will say that Grosso and Camo’s hard work was greatly appreciated in a mix of players who at times didn’t seem all that willing to work or get themselves open for anyone.

Can it be said that yesterday’s game lacked the creativity of Pirlo? Sure it can. Can it be said that yesterday’s game lacked the intensity of Rino? Sure it can. But last time I checked this is a roster of 23 players who are supposed to be Italy’s best and brightest and should be capable of a victory regardless of who is playing. But yesterday this was not the case. I would like to start first and foremost with Perotta who for me yesterday was abysmal and non existent, the Don folded under the pressure of the media and played the Roman trio, and the end result was the same as the Milan trio, a loss. A loss is loss if it is 3-0, 10-0, 1-0, or PK's.

Slightly behind Perotta was Aquilani, whose future may very well be bright, but his magic trick of disappearing should earn him Houdini status in no time. There were times yesterday that it looked like Italy were two players down with no one in the tre-quartista space to help Cassano and Toni, wasn’t that why Aquilani and Perotta were included, isn’t that the reason that DDR is so special, he attacks as well as he defends?

I want to take a minute here to bash DDR, and disagree if you like, but I want to make this nice and clear. He may be very talented and he may enjoy a great career, but to think that his play can save this team or any team for that matter is arrogant. He is a role player, and his distinction as a number ten is incorrect. A lot of young players get tagged as special, full of potential and talent, but these are the players that pick up their games and lead their teams regardless of their age or the stage. Maybe the Azzurri were so far gone that they were beyond leading, but one does not need to look all that far to see the difference between potential talent, and actual talent with Cesc Fabergas vs. DDR. When Cesc came in yesterday Spain was alive and attacking and giving Italy fits in the back, again thank god for Chiellini the only answer to Cesc.

In ’98 the Azzurri had another Roman defensive midfielder who was 27 and full of potential. That same player missed a PK then and repeated his mistake in 2000 against the Dutch, but it was not as costly. That man is Luigi Di Biaggo, and we all know what happened with his career. All I am trying to say is that titles, honors, and praise are earned, not granted. Until a player like DDR, Cassano, or Aquilani earn it and lead their team to victories on the biggest stage, they are just talented, not superstars. For anyone who believes I am being biased here, any of the Milan fans will attest to the fact that I am just as critical of Pato and any other youngster in the Red and Black.

Two years is a long way away, and the potential of this squad is still strong, but a change will need to be made. The majority of the roster will be long gone save Pirlo, DeRossi, Chiellini and possible select few. One can only hope that veterans like Rino and Zambro are replaced effectively and the likes of Giovinco, Nocerino, and Osvaldo can usher Italy into a new era.

This pretty much sums it up for me… 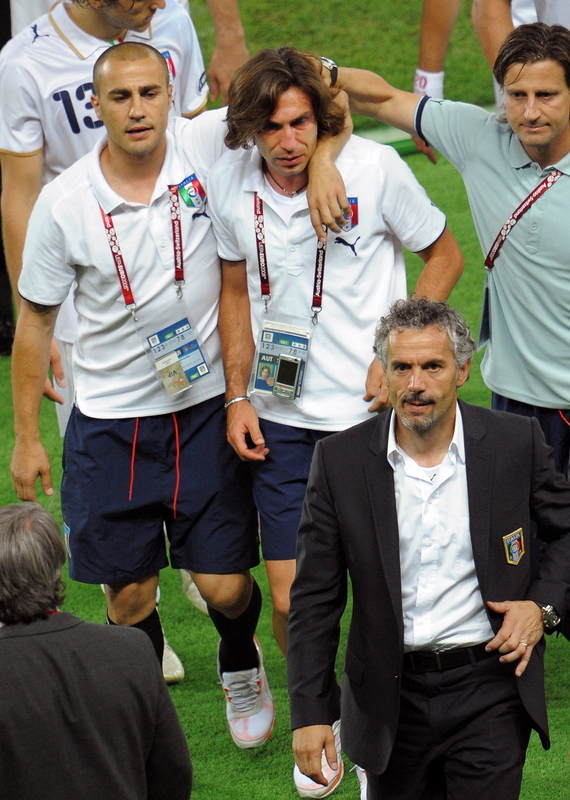