What do I say, if I followed suit from some parts of the Offside and I would lambast certain midfield players for their lack of stellar performances. OK, just one, was Perotta here in my living room drinking beers because I swear he didn’t touch the ball in the first half, OK I’m done.

What do you do if you are The Don, you succame to pressure and put out your alleged best eleven, and what do you get? A draw, an inch of Gigi’s toe draw, a glance off the post draw, regardless it was not a convincing performance. These guys just really failed to execute when the chips were down. Defensive errors yet again proved costly and a lack of real menace in the final third led to a single point. Some of the calls today were suspect, but it is hard to really blame referees, because it doesn’t solve anything and is merely an excuse to make up for a poor performance. I am surprised The Don called out ref’s but you can imagine what else came out of his mouth with weight of the world he has been shouldering. 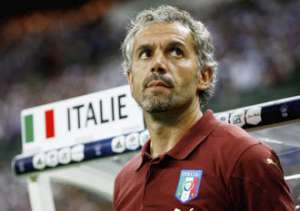 Alas, all is not lost a draw against France and a win by the Dutch still gets Italy through to most likely meet Spain. Don’t deny the ties of MVB and The Don, so I don’t believe a Dutch flop is a real worry, but then again a win against France would make things much smoother and give Italy the tried and true win loss draw and through of the nineties. I don’t envy The Don by any means as his job has gotten exponentially harder, he really must look at the roster and say what the hell do I next? I don’t know, I just don’t know.

Some observations from today:

-Gigi was MOTM, the PK save was glorious.

-Chiellini was a close a second and impressed. Does anyone else think he looks like a mutant-Frankenstein type version of Canna?

-ToniGol has lost his moniker in my book, he is now ToniCementShoes. What was he deal today, he looked slower than death.

-Watching Mutu and get taken off was really a testament to the passion that these guys play with for their country.

-ADP has got real bad luck in the Azzurri limelight and though he had some good early stuff he faded as the match wore on. Maybe it was age, maybe it was marking, but there was no doubt that he wouldn’t last the whole 90.

-Camo is a machine, that man covered a ton of ground. Was it meangingful? Don’t think it helped all that much.

-Grosso was a man possessed in the first half; slowed down a bit in the second but still amazes me.

-Every minute Pirlo was on the pitch, he played worse than the minute before it. I am worried about our main man...

-Romania are not the Dutch, the Dutch look real good, Romania look about average, and France is ripe for the picking.

I want to apologize for the Milanista fans and devote readers who may not appreciated the red and black tinted Azzurri coverage. The Euro is a big tournament and Milan players and ex playerse are really in the spotlight. If the Azzurri is not appreciated please let me know, but transfer news is slow and if it picks up I will give it its space.