I have tried to put a post together for a few days but with some anger, frustration, and a sense of emptiness since Monday nothing has really read the way I wanted it to. There is one message that has shown through in all my ramblings and that is regardless of what I (or we) think about these players or I (or we) think about The Don, the bottom line is these are the players and coach that we got and before the game Friday or the end of this tournament these two things will certainly not change.

What I will say however; is that club affiliation aside, it really doesn’t matter who on earth ends up on the pitch for the next two games as long as the result is 3 points each.
Hell The Don could field Inter’s midfield for all I care (sorry I had to get a rib in there), but regardless of who it is, the sloppy lack of execution from Monday has to be gone. There was a heck of a lot of finger pointing intra-squad, and in the media, but not a single sole, other than Gigi, owned up for their own performance. Goals were missed, men weren’t marked, and their was bickering in the tunnel; all this is just plain unacceptable. These guys are world champs, veterans, and consummate professionals and regardless of their captain or their coach they should be capable of better.

In the Don we must trust, and in the starting eleven we must trust….because as I said earlier nothing is going to change in that regard. 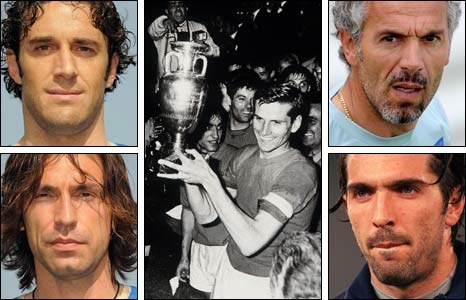