Pretty crazy twenty-four hours on the transfer market and I want to try and recap a bit of it and speculate a bunch more.

*Borriello has officially made his move to Milan so Fester can cross the first striker off his shopping list. This move comes with both praise and negativity depending on the ability of Borriello to succeed at the San Siro. Looking at it from a different light, Genoa would not have been able to pay a high tag on Marco so Milan taking him back was a bargain. Even if they decide to ship him out the profit would be more than anything Genoa could have paid, I hope he stays and thrives because I am sucker for an Italian succeeding at Milan.

*Following Marco into the doors of the San Siro is WC winning wingback Gianluca Zambrotta. 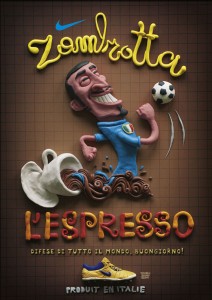 The price was right and I am happy to welcome this guy to the squad. Just image for a second Zambro, Paolo, Nesta, and Oddo, it is music to my ears. With Kaldadze, Bonera, and Janks in the wings you have to believe that defensive issues are not as bad as we have made them out to be as long as everyone is healthy. Depth is key here and adding another player would not be frowned upon. There is a fair amount of talk that Fester has more defenders on his radar with the likes of Maggio, Zapata, Dossena and even Domizzi on his list. Though none of these players seem to be showing the hot and heavy interest for Milan that we all like to see all of them have been shopped around and all of them have a price. For me Maggio would be a great swoop, but anyone on that list is a huge plus in youth or versatility.

*A return to Milan is also in the works for netminder Abbiati. I am all for this move as Abbiati has proved time and time again that he is the real deal.

I like the guy both as a player and a person as his cockiness is refreshing to see in a GK. I mean for a guy to say that he would rather stay home than go to EURO 08 as the #3 keeper is a pretty gutsy, but he says he is better than Amelia, and it is time for him to prove it. The other positive of Abbiati is he has played in big matches in Serie A and CL and his upbringing in the Milan system make him a strong teammate for the rest of the squad. Now if they could just get Dida off the books they could shop around for a much younger goalie to have waiting in the wings for the future.

*Apparently Carletto had a meeting with Roman Abramovich to discuss tactics at Chelsea, and possibly the return of Sheva!? During the meeting Roman did little discuss but a lot of hitting on Carletto to come to Chelsea. When the meeting was over Roman cried up and down the block how much he loved Carletto and how good a fit to what he was looking for as the leader of Chelsea. To make matters even more intriguing he offered Carletto a large transfer purse along with a fair amount of compensation to Milan for his services. As of now Carletto has stated that he was flattered and Fester has further stated that Carlettto will go nowhere but can you image the windfall from a move like this!

Milan would be coach-less and with Jose all but wrapped up at Inter, it leaves only a few unemployed coaches on the shortlist. We discussed this a few posts ago but with Carletto ending up at the National team, but if he goes to Chelsea a few players may want to go with him. For the moment I don’t even want to think about but this transfer just seems to get more and more crazy everyday. Could Mourinho’s unveiling be held up because he wants Rossonero instead of Nerazzuro, and he is waiting on Carletto’s next move?

*Moratti may pull the trigger on Eto in the next few days taking him off Milan’s striker list but this also means that Moratti will get his ass out of the striker market leaving Milan without the worry of their bastard cousin stealing away another striker. Without Eto on the list Drogba and Adebayor become a lot more attractive with Drogba likely to be the most attainable target. A few weeks ago it looked like a move was imminent but with the Mourinho debacle unsolved, and Chelsea in a state of flux it looks like this cliff hanger is yet to come close to an end.