To Stadio Olimpico the Rossoneri go on Saturday afternoon for a very pivotal game against a Roma side who is coming in hot. With a dispatching of Real Madrid and a handy win over Napoli Roma are firing on all cylinders and have their eyes squarely on Inter at the top of the table.

Let’s talk about Inter for a moment before I preview Saturday’s game. This team is ripe for the picking, their coach might not be their coach by the time I post this blog, their attack from the midfield is non existent and their defense is in shambles. If this team was going to lose this scudetto race, now is the time.

OK back to the task at hand, Roma is clearly focused on the Champions League and the Scudetto, and have hopefully already overlooked Milan who are in a bit of race of their own, fourth place and that nasty ticking biological clock. But with a few wins strung together catching Fiorentina and even Juve is not out of the question. The problem is the old and tired Milan that played the first half against Empoli, and the last 65 against Arsenal will not lead this squad into the top four.

Carletto is assuring a rested and changed Milan, forgive my skepticism, but I will believe it when I see it. Honestly unless Carletto has a way to assure that everyone would be healthy and rejuvenated both physically and mentally then a new Milan will be hard to come by. What Carletto can do though is mix in guys like Gourcuff, Paloschi and Bonera who are hungry for time and to show that they want a place in the squad next year.

Il Capitano knows the threat that Roma poses and respects them and their style, and I tend to agree. But they have to bring their A-game and if they get three points, but we need them more than they do, so Forza Milan. 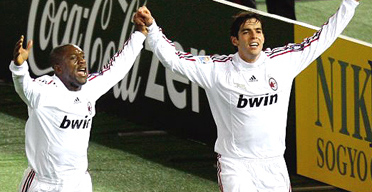 -Benzema has extended his Lyon contract make his move to the San Siro even more unlikely.

-Ronaldo is back in Milan, and I hope that it is to pack some bags and collect his last few paychecks. This team needs to move on and Ronaldo is not in the plans.

-Ivan Pelizzoli, former Roma netminder, is the new transfer target for Milan. Pelizzoli is currently plying his trade in Russia, and at 27 years old is seasoned enough to make the move worth while. I would much rather prefer Amelia, but this kid looks talented, and if he falls through I still think Carlo Cudicini would make a nice addition.

-Rino is a bit wishy washy on his love for Sheva. First he criticized his leaving, and is again saying he would welcome him back. Many of us believe that Sheva would have to crawl back to be welcomed with open arms, but a he was a proven scoring in the red and black and would be a sight for sore eyes in front of the net.