CHANGING OF THE GUARD

Furthering last week’s discussion about Captains. Paolo served in two of the most important captain roles in all of Italy, he was the leader of the Rossoneri and the Azzuri.

In 1997 the great Franco Baresi walked away from San Siro as the most recognizable captain the club had. His tenure as skipper lasted 15 years of his 20 seasons played. It was then that he relinquished the armband to Paolo Maldini who went to best Baresi’s seasons played, years as captain, and in my opinion the title of AC Milan’s best defender. No offense to Baresi, but Paolo is the man.

This pair forever linked in history of both club and country, were involved in another changing of the guard. This time it was here on American soil in 1994, after suffering defeat to Brazil in the World Cup final a teary eyed Baresi handed the armband to Paolo Maldini. For the next 8 years, two world cups and two euro cups, and no major victories Paolo led the Azzuri to a fantastic run of play, but it was never enough. In this time he even had the pleasure of being the captain to his father as coach, truly an amazing moment for any captain. 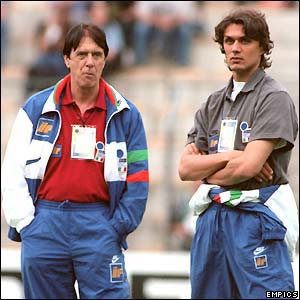 Azzuri fans have already seen the changing of the guard with Paolo giving way to Fabio Cannavarro, who four years later lifted the World Cup. It was a bittersweet victory for me as I knew that Paolo was not there to lift the trophy, much like Baresi path the Rossoneri will again have to watch a changing of the guard. Who will attempt to fill the shoes left by a legend, who would dare even.

Gattuso seems the most logical choice in my opinion due to his intensity and passion, but even he knows that it is job maybe far superior to anyone on the squad. Ambrosini has shown that he can fill, and if assured a spot in the starting eleven I could not be happier with the choice. Pirlo at 28 years old is another perfect choice, but his quite nature makes better suited for the role he occupies than one of a team leader. A choice that I find hard to swallow is Kaka, who has stated that he would love to wear the armband (a big time no no in becoming a captain, you don’t ask Ricky), but I cannot see a foreigner carrying the torch of the Rossoneri.

Who will answer the call? Maybe a new coach will make the decision…