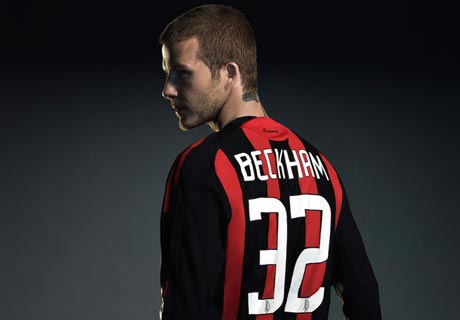 Let me start by saying I have a confession to make, “I LIKE DAVID BECKHAM.” Hell, David Beckham is and always has been one of my favorite football players, and that is statement that comes far from within the realm of David Beckham. Remove his “media friendly” persona, his dashing good looks, and his attractive wife; you are now left with a player who has been successful in the EPL, La Liga, and the global stage. You have a player who cried when he was dismissed playing for his country, cried more when he could not continue against Portugal, and wants nothing more than to prove to the new England coach, Don Fabio, that he is in fact a player worthy of a call up to the English National team en route to a fourth straight World Cup qualification.
Say what you want about him, but there are few players who have given as much as David Beckham has to the game of football.

We are now fortunate enough, for a short time, to welcome such a player to the ranks of the Rossoneri. Yes it may be only be for 12 games, but for those 12 games, while injuries are rampant across the board we will have a player who is playing for the right to return to his National team, an honor that even certain Rossoneri, and other Azzuri players chose so foolishly to dismiss. On the pitch, Beckham, depending on how he will be used (more on that in a future post) will give the team depth, width, and scare an opposing GK who now has the prospect of a free kick from three of the World’s best dead ball finishers.

Off the pitch, AC Milan, will now become a household name to millions of David Beckhams from the West coast of the United States to the Eastern most of South Korea, where Becks has wooed fans in his playing wake. If this means that a few of these fans become lifelong Rossoneri fans from watching Pirlo magically work the middle or Maldini playing his heart out at forty plus years of age while they tune into Becks, it makes his inclusion all that more significant. 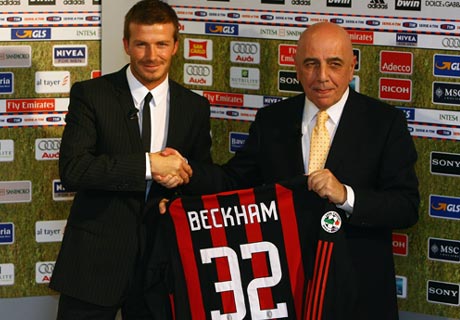 Sure Uncle Fester wants to sell a couple more jerseys (mine is on the way) or put a few more asses in the seats, but is this such a bad thing, after we accepted it with Ronaldinho? Football is a passion for you and for me, but for others it is a business, and in this global infrastructure adding a player like Beckham will only help the Milan brand and possibly increase the chances of a better signing thanks to the increased cash flow. MLS knew the power of Beckham, and like Madrid before them, Milan sees the benefits of this move both on and off the pitch.

As an American fan of the game I was happy to see Beckham arrive, and paid to see him play. I understand for the sport to grow here it will take players that transcend the game, but also raise the level of play. If he never returns to these shores and stays at San Siro, it will be hard for MLS, but if my club can work somehow to better the level of play in my country, say with the export of players like Seedorf or Pippo than this move has far reaching benefits that at this moment have not even begun to be discussed or discovered.

Ridicule the move all you want, call it a bad for Calcio, Serie A, or even Milan. But when you are done blowing hot air, take a minute and ask yourself some simple questions. If Becks helps us win just one game, has he not done his part? If fans of Beckham buy Milan jerseys with his name on the back, but with the Rossoneri on the front does it not benefit the club? If a few hundred EPL or La Liga fans take one minute to tune into Beck’s debut against AS Roma on January 11, and like what they see, hasn’t Milan benefited the Serie A as well?

Enjoy this video, and hope that when it is all said and done, we can say thanks as well…