Yesterday’s game reminded so much of last year’s win over Napoli, it was uncanny. The only real difference was that Milan only conceded one goal, and considering our defense as of late it was a nice surprise. Both games celebrated the arrival of a new squad member, and both games were in the midst of injury crisis’s that could cripple any team to the ground. Call it what you want, but this match can yield one of two results, momentum to carry us through the season and reinforce the fact that the Rossoneri can in fact score and play defense, or it can cause complecancy that was the ultimate demise of the 2007-2008 vintage Rossoneri squad.

Yes, it was win, and yes it was a big win, but this match cannot make overconfident and forget that this team does in fact still need defensive help, but the outlook as not as girm as it once looked. I will not go ahead say that we can know push once again for the scudetto, but a fourth play finish is well within reach and the next two fixtures will go a long way in proving the metal of this squad.
The formation was the same as always and most of the players were as well, however yesterday showed a work rate and pace that has really lacked since the Lazio match. Not sure what spurred on this performance, maybe it was the arrival of Becks, maybe it was something Carletto said, but either way this was a team with some grit and a link up that reinforces the idea that Milan can in fact play the beautiful game. 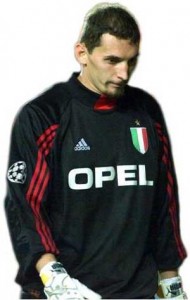 It started from the back yesterday with Abbiati, and for any doubters that still lingered, our old net minder is in fact the best acquisition made in the offseason. As the old saying goes, good GK’s make the easy saves easy and the great saves easier and he looked lights out yesterday. Kudos to Paolo and Antonini who worked wonders marking out Toto and FabQuags who are as dangerous a dou as they come. Antonini may not have had the most phenomal performance but his pace proved pivotal in widening the attack, while still limiting space for Mr. Christmas. Favalli did well in the attack, but was more stay at home to help neutralize and really frustrate Pepe who has been a key cog in the Udinese attack. Yes Udinese is off form, but this was a team that needed the win just as bad if not worse than Milan, and the Rossoneri shoved that in their faces.

Pirlo seemed back to his old ways playing balls into the space and taking a fair amount of pressure off Ronaldinho who not only played well but raised the play of those around him by doing no more than necessary. Performances like these will win me over time and time again. The real stars though were Pato and Kaka who when given space and proper service are as dangerous as they come. Speed is the name of the game and I have to believe that Borriello would have only compounded the already unstoppable attack with some muscle and in and around the box.

The real victory for me came from Carletto who showed faith in his gut with Janks and LM and Antonini at RB and was handsomely rewarded. I was also extremely pleased to FINALLY see Darmian, who looked like a deer in headlights, but if no defensive help comes, playing this kid next to Paolo would not bother me in the least bit. The real treat for me though was Rodney Strasser. 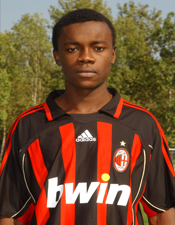 Don’t know what it was about him, but in the few minutes on the pitch he showed a swagger and confidence that reminded me a bit of Jon Obi Mikel. The Sierra Leone midfielder may in fact be a diamond, and the fact that he was willing to shoot, plays the tough balls, and get dirty with the yellow made me smile that someone was in fact playing for a job and the shirt. Maybe I was to euphoric from the Milan performance but this kid really made an impression and I want to see more, who knows, this could be the next Michael Essien or Yaya Toure! AND WHY NOT!!

The next few weeks before the Roma match will go a long way in getting this team back on the right foot injury wise, but I hope Carletto can find a way to work some of this youth into the team as well. The dimension of hunger and pace seems to be infectious and if they can be played in comfortable situations it should become a priority for this team, imagine for a moment midfield line of Gourcuff, Pirlo and Strasser!? What was once an aging squad may in fact have the tools needed to trickle the age down lower and lower while still maintaining the old guard. Milan of old always found a way to groom players from Albertini all the way to Kaka and this notion should NEVER be lost.

The next two weeks should be a lot of fun, I want to catch up on a ton of transfer rumors and grade the team at the half way point, but also prepare us for the assault on the top of the table, scudetto or not this team is not flat lining and showed that they can still fight when they need to. Hopefully we can fight right along with them!