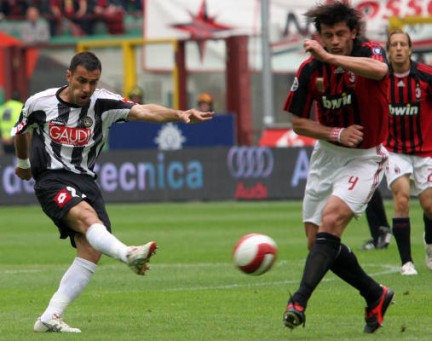 I want to do this preview in reverse today so instead of giving the potential lineup for Sunday at the end, I want to start with it.

Here is the probable lineup as pulled from various websites:

What is your immediate gut reaction when you see this lineup? My first reaction was is this really the best we can do? When you consider the laundry list of injuries and suspensions it is a marvel we Carletto can even find 11 bodies to suit up. The other thing that jumps out at me, more that than lineup is the fixture itself. This is easily one of the most important matches Milan has participated in since the 07 CL Final, don’t let Fester try and tell you the otherwise with the Club World Cup.
Call me overzealous or even over exaggerated, but a loss tomorrow from the Rossoneri and win by the clubs in front of them, and the chance at the top of the table will slowly slip away and fourth place soon thereafter. Milan lost two early matches to Bologna and Genoa, and by dropping those points, it makes games like this one all the more must win, coupled with the table position and I think you begin to see my point.

Udinese is not a slouch and was an early riser in the Serie A table this season, since then both teams have fallen off the pace and both squads can use the points. Udinese is an interesting squad and one that is easy to respect with their great blend youth, Italian talent, and foreign players it is impressive and worth emulating in any club. Milan will not have the chance to see transfer target Zapata due to injury but Toto DiNatale and FabQuags should be in full force so the Milan defense will have their work cut out for them.

As for the defense, the notion of Favalli, Kaladze, and Janks scares the crap out of when taking into consideration the speed of the Udinese frontmen. Janks has played a ton this season, and though he is needed it may best harness Antonini’s speed in match such as this. If Antonini plays the right flank, Favalli or Janks can go to the left where they can do less offensive work because Dinho can push the issue on that flank. The other surprise inclusion is Cardacio, but I won’t believe it until I see it. Considering that we all know Carletto has three fit strikers, OK maybe not fit to score, but fit to play, it is a bit puzzling that he could roll out one striker when he has the ability to play two with a diamond midfield and the ability to leave Emerson on the bench. Seems like a pretty obvious win win situation, which means it will not happen that way.

So here we are again very close to another important match, and the last before the holiday break. The points are necessary, the lineup is piecemeal, but the goal remains the same.