I am not going to sit here and recap this entire the game, because quite frankly there is not all that much to talk about. Both teams were extremely wasteful, both teams were sloppy, but Milan, and more importantly Rinodinho and Ronaldinho were up to the task and did not quit until the final whistle. Rino’s little touch and Ronaldinhos cracking goal made me jump out of my seat, and notched another win. 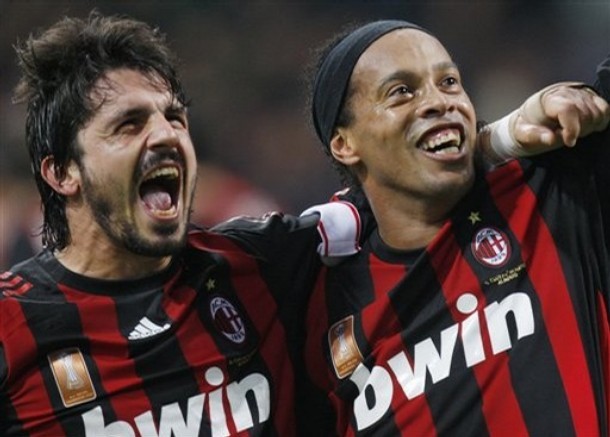 Not a single Rossonero was mistake free, but on the flipside every player stepped up when needed. Even the lowly Dida contributed to this victory with some good positioning and doing just enough to keep the ball out of the back of the net. The star of the show is and has been Rino Gattuso who no matter the match has the tenacity for the tackle and the touch of genius to keep plays alive and keep the squad in the match.

Another win, and with a place atop the UEFA Cup group this team is beginning to look more and more formidable with every passing game. They may not be playing the best calcio, or playing the other team off the pitch, but for the first time in a long time I see a team with determination and grit that has been missing since the World Club Cup Victory in 2007. The more I watch this team the more I see a team akin to the Chelsea squad that won the EPL two years in row. Sure they were not the most dazzling team, and sure they won some close games, but when the clock was ticking that team found a way to win, and the Rossoneri vintage 2008 seem to have that same never quit attitude.

Do I wish the team was blowing the socks off their opponent? Of course, but stockpiling wins is just as good and right now we are on a role. Ray Hudson said it best today, when referring to Milan, he stated their talent and said this team should win the UEFA Cup and if not it’s a shame. I think Ray is spot on, but he forgot to mention that they will certainly compete on all fronts, which is something we have not been able to say in a very long time. I will not be convinced until the trophies are in grasp, but I am feeling quite good for the state of the Devil of Milan.