The UEFA Cup has not been as much of a curse as everyone has made it out to be. The real curse of being a fan of a big club in the UEFA Cup is that information on opponents is very hard to find, and a scouting report is even more difficult. Milan’s next opponent, SC Braga of the Portuguese league, is no exception. What is even more frustrating is that even UEFA.com does not preview these games in a proper fashion. For a group wanting to change and tout the UEFA Cup they do not do a very good job promoting it, while we are inundated with all things Champions League, any type of UEFA Cup news is nonexistent. 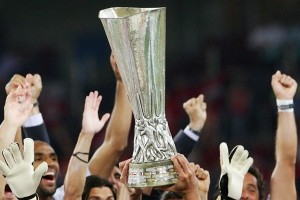 As fans of the Rossoneri we have taken for granted our clubs status as a not only a Champions League winner, but a perennial contender. As we all know last season did not go as planned and we are now being given an opportunity to see how the rest of Europe’s second tier elite lives in the UEFA Cup. As I mentioned earlier it has not been all bleak and dark as once imagined, but it is certainly a tournament taking place in the shadows and in the background. We can only hope that if Milan does find success in this tournament that they raise prominence to the Cup and also to some coverage.

I don’t know much about SC Braga, but I am hoping that Carletto does. Calling for Carletto’s head is a distant memory, and his tactical moves and player choices have either been pure luck or a better understanding of how his squad operates. He has also fallen into the “this is my Serie A squad” and “this is my UEFA Cup squad.” The latter having names like Antonini, Sheva, 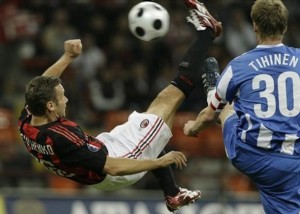 and at times even Old Man Emerson. But Emerson has featured in quite a few games lately and he may not be available for a few weeks considering his last few performances. Dida has even made his presence known in these matches, which all and all makes projecting this match or even Carletto’s lineup.

If I had to venture a guess, I would figure to see Dida, Bonera, Kaladze, Favalli, Antonini, Flamini, Emerson, Ambrosini, Dinho, Pippo and Sheva. Regardless of the lineup the best thing for this squad as a whole is to continue winning. As many a great coach has said winning is contagious and builds a culture of confidence that is tough to shake no matter the competition. Plus being tops in the group is never a bad thing.