A while back, before Dinho was a member of AC Milan, we briefly discussed the potential for Dinho and Kaka to coexist and play together for AC Milan. I was a bit tentative to say that the picture looked bright, but one had to figure that two players that talented should be able to find away to make things work. A few months into the Serie A season, I think it is time to revisit this issue again. 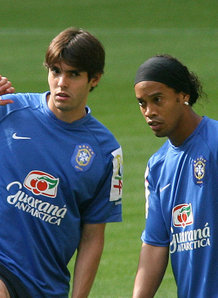 We should start by discussing a few of the issues that we should have brought up ages ago about our newest Milanista, Ronaldinho:

- World Cup 2006: When the world’s best squads travelled to Germany in 2006 the experts were pretty fixated on a squad containing Ronaldinho, Kaka, Ronaldo, Adriano and Robinho, quite honestly the single greatest attacking force in the history of the World Cup. We all know what happened after that, Italy hoisted the cup, and Brazil went home after a quarterfinal loss to France. That Brazilian squad lacked the luster and unity that past Selecao teams have shown on their runs to countless WC finals. I wouldn’t say that Kaka and Dinho were the sole reason for this team’s failure, but it was one of the many factors that played a part. 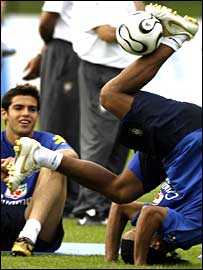 - Lionel Messi: I would consider Little Lionel to be the closest in terms of style of play to our own Ricky Kaka. Granted Kaka is stronger on the run, and Messi stronger on the ball, but these guys are both right sided, roaming, extremely dangerous game changing players. I recently asked myself and wondered if the rise of Lionel as Barcelona’s main man was and had anything to do with the decline of Ronaldinho’s presence on the pitch. Messi’s rise seemed to coincide with Dinho’s fall and if Dinho couldn’t raise Messi’s game and seemed to somewhat stifle it, can it be he is doing the same thing to Kaka. 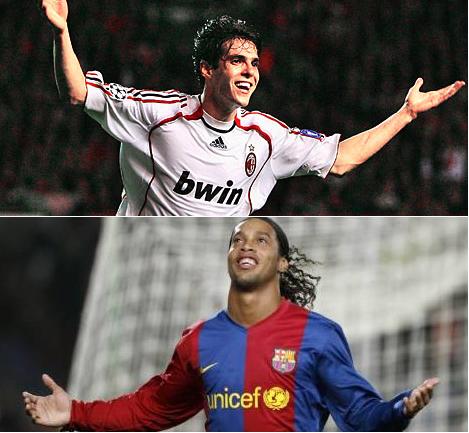 -The Gerrard vs. Lampard Debate: Can two very similar players play together and succeed on the same pitch. This argument seems to get the most discussion surrounding England’s two central midfielders and has at times left coaches and fans scratching their heads and wishing one of those players is left off the bench. Do we have the same issue with the Rossoneri? Dinho is scoring, but Kaka is not, and more alarmingly Milan can’t seem to have a goal outburst that despite the past few season’s lack of success they did find ways to put 3-5 goals up on occasion. Lazio was the last game that saw Milan win comfortably, and as Carletto has leaned more towards the XMAS tree with Dinho and Kaka behind the lone striker, the scoring has seemed to diminish. Carletto will have to decide what exactly the best course of action is for this squad, but it is better to play the tinkerman now instead of when the games start to become more and more valuable.

As you can see there are issues here that when closely looked at leaves us wondering if in fact Kaka’s lack of success stems directly from the inclusion of Ronaldinho. Without some experimentation we as tifosi may never know unless Carletto plays the carousel game and gauges the team’s success. Please don’t take this discussion as my call for one of these players to be benched; they are both excellent players who as you can see from the video below are to be considered as world class. But despite their individual abilities it may very well be that they are incapable of building off that success in the same jersey…