FC Zurich down, Cagliari on Deck

Share All sharing options for: FC Zurich down, Cagliari on Deck

Five Games, Five Wins, moving on in UEFA, and 9 Serie A points…

Really a good run by the Rossoneri, and the team is really starting to gel and come together as a unit. What makes this even sweeter is the good times keep rolling despite an injury to Borriello, Pirlo, and a depleted defensive core. The big plus for me has been the step up in performances by Pato, Seedorf, and Janks, and the rebirth of Ronaldinho. 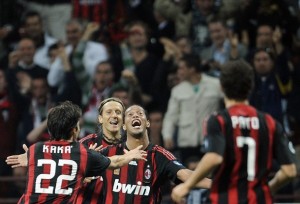 What I find even more promising and comforting is the spirit within the team itself. As I read interviews and reports it is nice to hear players saying that they must remain focused, every game is important, and that every player is ready to be called upon to perform. For the first time in a long time I feel Carletto has the utmost respect and control of his players and the players seem to want to go out there and make things happen, it is AWESOME.

Sure the game against Zurich was not a clinic, or an easy win, but the fact that Milan was able to go to Zurich and earn the result is all that matters. They were able to dictate the match tempo, and get Sheva his first goal back in the red and black. This performance allowed Milan to earn a top spot in next Tuesday’s group draw, and hopefully be a solid step needed in the efforts to see Maldini off with some silverware.

This Sunday sees Milan travel to Sardinia, to face a reeling Cagliari squad, who has yet to gain a point in the Serie A and are in desperate need of a win. On paper this game is a cinch, but this season’s campaign has shown us that no points are easy and that every game will in fact be a game no matter the opponent. Cagliari will come out swinging, they have to, and as was shown in the first two Milan matches, the team is susceptible to conceding goals, and if Cagliari can score early they will be in the driver’s seat. It is important for Milan to exert themselves on the match early and not give Cagliari a chance to breath. A shut out would be superb, but a win is a win.

Carletto’s new found flexibility in formation makes calling a starting eleven a little bit harder. Don’t get me wrong this new found confidence in a flexible system is great and I would much rather be wrong on my guess and Carletto throw us a curveball because the opposing tactician is getting the same curve. He has shown willingness to play the personnel on form and a repeat of the Inter formation is no problem by me, especially playing away, but if two strikers are fit and ready, Sheva and Pato, then by all means throw them on the pitch. Seedorf has proven his ability to play almost everywhere this season and his inclusion seems to be a must, but the rest of the squad is a real toss up.

Kaladze is injured and won’t be back for awhile, Maldini has played in almost every game this season, a break would be nice, but it may not come anytime soon. If Maldini does in fact play on Sunday, I think it would be the appropriate time to introduce Darmian to the side alongside Il Capitano. 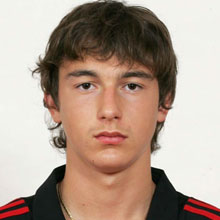 Ambrosini can certainly slide back but this will not help us going forward, give Darmian his chance and let us see what he makes of it. Moving somewhat out of position or making do will only stunt the growth of the youngster and continue to prolong the agony of Milan’s lack of youth in the back. Bonera is another solid option and if he plays Milan will not be bad off, but I would rather the youth.

If Carletto takes my advice the squad would be as follows:

This would make a 4-2-3-1, a drunken Xmas Tree if you will, and may be a viable option considering the personnel available. It gives us strength in the middle and allows Seedorf to play a more advanced role because of the pace of Flamini and Ambrosini behind him and in front of the defense. Ideally this is what the Xmas Tree probably should have been, but due to Pirlo’s deeper comfort it does not work out this way, but with Clarence in the playmaker spot this may be a solid tactic. I guess only Carletto knows on Sunday afternoon…