Well my wacky schedule is finally settling down and today afforded me some time to watch the midweek match, albeit a day late. My friends always ask me why I pay so much attention to matches when I already know the result, but for me it is a bit more about the journey then the destination, but knowing the destination is a good one makes the game that much more fun, and that much easier on the nerves.

So as I watch the game here in the 10th minute with a small army of Heinekens (Heineken paid no money or provided any form of compensation for this shameless advertisement, but as the beer of the CL, I feel the best way to enjoy it is with the team of the CL, despite our one year lay off) I want to just spit out some thoughts on the action and then pull it together with a recap in what is going to turn out to be a bizarre post post-match post…

12:43 – Does anyone think there is a stat somewhere of how many times Pippo has been offside? It has to be over a thousand, maybe more!

14:04 – Abbiati looks so much more comfortable in between the sticks than Dida ever did, even when Dida was on top of the world he just looked nervous all the time. I don’t remember a GK being so cool and collected since Zenga in the Azzuri shirt…

15:07 – There are times when Kaka holds possession so long he makes me want to scream pass so loud at the TV that he may someday hear me. If you have the ball and you see four defenders, just make the pass! I hope Pato doesn’t learn by example.

21:03 – Onto my second Heineken, figure if Emerson is not going to make any mistakes up to this point I may as well start drinking more…

23:07 – I cant even really tell what position Emerson is playing, but he really hasn’t put a foot or ball wrong, maybe the Becks thing and his potential expendability is really worrying him, or the guy is just in form and Carletto is taking advantage of a good thing.

25:56 – Good pass from Kaka to Antonini, Antonini looking like a younger, quicker version of Oddo. But with a more accurate foot, thought the young gun was a left sided player so a bit confused on the switch with Zambrotta. However, a left foot right wing back makes a much more lethal scoring chance outside of the box.

27:35 – One of the comments said that Siena’s coach looked like a clean shaven version of Flamini, I have to agree.

30:22 – OK maybe Antonini’s foot is not all that accurate as he skys a cross/shot way over the bar Oddo style.

30:57 – GOAL!!!!!!!!!! Really pretty link play from Seedorf, Kaka, Rino to Pippo. This team seems to be able to score from nothing and it is nifty to watch. They seem to lull opponents to sleep and then bang just like that it is a goal. I like that lurking danger; it keeps teams honest, and makes Milan intimidating. Great pass from Rino though!

34:41 – Very nice little shake and bake from Pato with a ton of venom in the shot.

35:23 – Pippo misses a sitter there which probably would have put Siena away so close to the half. I love the man, but it is misses like those that make shake my head and wonder how he missed that ball.

37:47 – Can’t quite tell if the defense is playing really well or if Siena lacks the last bit of bite in the final third to push the net. I would like to think it is the defense, optimism I guess, but I think it has a bit to do with Rino covering a ton of ground. When his game is on he almost reminds of sweeper that plays in front of the defense. The more I think about the last few games, the more I feel like Rino is getting better and better and better. The thought of him and Pirlo back together side by side is scary, considering the amount of offensive firepower Milan is now capable of. Maybe Pirlo’s poor form was directly correlated to Rino’s and their relationship is so symbiotic that they need each other to be at their best. Either way just a few months ago at the Euro’s a lot of people were calling for Rino’s head, well guess what, he is getting mad, and you don’t want to play him when he is mad! 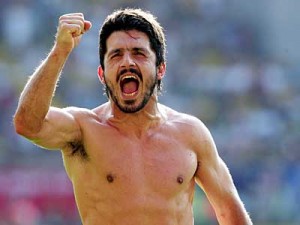 HALFTIME – Solid half, good but not great, kept Siena quiet and have a lead. Can’t ask for to much more.

47: 41 – Still no Emerson blunders, so let’s have another Heinken. Hopefully I get a little drunk and will forget to mention that he didn’t suck.

49:40 – I just starting wondered why on Earth Favalli is playing CB and I realized it is purely out of necessity with Nesta, Kaladze, and Senderos still nursing injuries. He doesn’t really have the body size/type for the position, but considering that Bonera is really covering his ass makes me happy considering this arrangement last season would have meant a sure loss, or close too.

51:30 – Seedorf has been a bit hot and cold today, every good pass has been complimented by a poor one. Sometimes I wish he would just play simple and keep flowing going like he did in his masterful performance against Inter.

53:09 – Wish I hadn’t talked up Rino and Bonera earlier, bad clearance, bad marking and me politely eating my words. If I didn’t know the result I would be extremely angry right now, a very bad run of play there to lead to that goal. Bit flat since the start of the half, result or no result I need another beer after that. These mistakes prove costly if games end in a draw, or worse a loss.

56:23 – Pirlesque pass from Emerson! Who is this man and what has done with the old Puma!

58:51 – Pippo called off, definitely onside, but at this point I don’t think Pippo can ever get the benefit of the doubt.

60:35 – It almost seems like Zambro has been ordered to stay back and play to protect Favalli. He is not pushing the issue at all on the left flank and it makes me wonder if he was told

62:42 – PK’s make me feel dirty, like we stole something. Granted I will take it because Milan has had them called against them many times, but they never quite make me feel right. Knowing he scored makes it all that much easier too! Good guess by the keep though, but when you kick it well, good guess or not the keeper has little chance.

65:32 – Another great run by Pato, kind of hope he gets a run out with Borriello against Napoli. Those two just seem to work wonders together.

69:45 – Little too much offense for Siena but a very nice break and chance for Pippo.

74:26 – Zambro makes a glorious run, solid effort on net to win the corner. The breaks have been promising in this match, but I can still do without the Siena pressure.

77:00 - Sheva in, not sure what to make him anymore. Want him to succeed, but seems to like that bite that made him a Milan hero. I struggle with the idea of Sheva just losing it or regressing so much, but it really makes wonder what he is or has been doing differently, and did Chelsea really ruin him?

80:33 - Much more solid defensively here, Siena not getting near the box, but Milan still seeming content to play behind the ball. Not sure why they aren't countering here with some menace to put the game away. Siena clearly playing more forward and should be a bit weak at the back.

82:35 - Tough challenge from Rino, another yellow, not a good place for a foul. Again knowing that this free kick wont go in makes it all the easier, especially when I saw how close it really was. Abbiati a bit out of position to boot.

87:11 - A welcoming good play from Sheva who has once again struggled to find a rhythm since coming on. Really looks like he is playing uphill.

90:49 - Just can't seem to score the goal to bury the match, would be nice, but makes me the win all the more hard fought. I am not asking for big wins every week, but winning by two now and then would be a bit more comforting, and help shake the "ugly win" tag.

93:10 - GAME OVER. Hope you enjoyed my ranting, and got to relive the game from a whole new perspective.

Picking up three points at home, which has been a struggle for Milan in the past few years, is very nice, and the run of form lately makes me quite happy, but let’s not get ahead of ourselves just yet. This weekend won’t be easy.