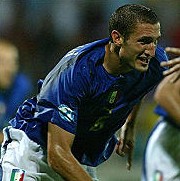 Ya i know there hasn't been much to talk about internationally since Italy's match with Romania was cancelled but here a few thughts to ponder about. Who will replace Nesta, Cannavaro, Buffon, Toni, and Co. in the near distant future for the Azzurri?

Chiellini is still playing for the U21 team but he has earned a respectable amount of caps(six) for a young player. I think he might be one of Italy’s next superstars because he is a good defender who can add to the attack and score beautiful goals just like he did against the U21 Spain. I also think Aquilani or Montolivo will be key players in the future.

Italy should just have a friendly with a random country anyway just to try out and debut thier young stars. A mix of key veterans like Zambrotta, Buffon, etc. can make these youngsters even better when they train and play together. Cassano make a comeback?